Why was my Omnipod bolus not run?

A different but PDM related question. Over the last 2-3 weeks, I’ve had this happen a number of times (5 or 6):

At some point I notice either my BG is higher than expected or I decide to do a follow up bolus… I notice on the status screen that the previous meal bolus is not listed as “Last Bolus”. I check “My Records”, “Insulin delivery” and the bolus that I know I started isn’t listed (I know that the bolus in question wasn’t cancelled inadvertently).

This has happened on both regular and/or extended bolus delivery. I can’t figure this out? I’m about to call Insulet but thought I would pose this question to the FUD wizards!

@Millz, my son has had a similar problem happen multiple times in the past few months. I have not figured out yet why, although I am not 100% sure that he actually got the “delivering bolus” msg. So I am intrigued in reading the answers we’ll see.

I’m about to call Insulet but thought I would pose this question to the FUD wizards!

I would suggest starting with going to Home>My Records>All History and reading through all the events and see if anything in there tells you what happened.

Was it extended? That will show up with an e next to it. Maybe you inadvertently hit extended instead of normal?

Maybe you inadvertently hit extended instead of normal?

It would still show in My records>History>Bolus if it was extended though.

Thanks. Each time I noticed a bolus that didn’t complete it’s delivery, I checked Insulin delivery history and the bolus isn’t listed. Just checked the All History and nothing odd there either.

Also, this has happened with both regular and extended bolus deliveries.

Gee, it never occurred to me to look at this. I wonder if that is happening in our house. I just posted on another thread about our Omnipod issues, and I wonder if this could’ve been a factor.

Thanks for sharing. We have had similar issues lately. Pod sites would fail for no reason, no occlusion alarms ever issued and we couldn’t figure out why. We were both also hesitant to chalk every incident up to a site failure early, which led to prolonged high BG. We were following the generally suggested protocol of pinching up a little bit while holding down the cannula end lightly during insertion, not bolusing more than five units, etc. By the time we realized that there was a problem, …

Generally, we can hear the clicking when the insulin is delivered. Do you use that as an auditory clue like we do? Does that still click when it’s not actually delivering anything?

Generally, we can hear the clicking when the insulin is delivered. Do you use that as an auditory clue like we do? Does that still click when it’s not actually delivering anything?

That makes sense that the physical delivery has feedback. Both in terms of ensuring you get a delivery when expected as well as NOT getting a deliver when NOT expected. I believe both the Tandem and Animas also had such a feature. Vibrations maybe? Never with basal. Always with Bolus. I think. Good point. One would assume Medtronic has something similar. Perhaps the FDA has a requirement that something along these lines must always be included?

(Although I can hear the Tandem basal delivery if I put on my rabbit ears and am very close and waiting for it.)

(Although I can hear the Tandem basal delivery if I put on my rabbit ears and am very close and waiting for it.)

Yes, that clicking is with my rabbit ears on.

Unfortunately mine are on almost all of the time, so I can hear it in the middle of the night if I listen.

You can you’re both basal and bolus deliberate. At least with the pump we have.

Do you have to administer enough insulin that the screen could be somehow “timing out”? I know the PDM timing out causes issues for us when we’re trying to “change out” PODs. If I’ve primed the pod and aren’t able to move through the other screens quickly enough (or press the ? to restart the timer/turn on the backlight), it goes black, then when I turn it back on, the POD is ruined. This has happened multiple times for us and has taught us that we just can’t let that screen black out.

Perhaps something wacky like that is happening with your bolus? For Liam, because he gets so little anyway, we just sit and listen to the audible clicks until the initial amount is given, and the PDM is ensured to be connected again, then we put it away.

This happened to me once where there was no record of the bolus that I know I gave. I notice that sometimes when I have my PDM on my granite countertop in the kitchen that it has more difficulty communicating with my pods, especially when my pod is on my leg, but the PDM usually beeps when it can’t communicate with the pod.

I usually make sure that I see the ‘delivering bolus’ message, but I can’t say for sure whether I saw it that time or not. I remember thinking that something fishy had happened when I realized that the bolus did not go through. It has only happened that once, but since then I am way more attentive to the message and the clicking of the pod.

I just tested this out. If a bolus command is sent and the pod is not within range, the PDM will beep and say communication error. The “delivering bolus” screen will not display. The next time you power on the PDM, the screen will still tell you there was an error processing the bolus. 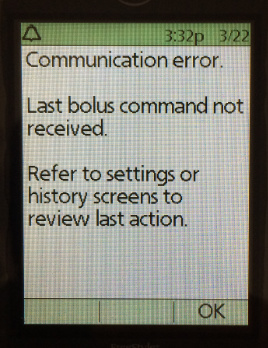 But the bolus will not be in history (of course, because it did not happen!).

So if you believe you gave a bolus, and it isn’t in history, it may be that the command did not reach the pod.

But if you do see the “delivering bolus” screen, I believe that bolus should always be in history.