What should I consume after exercise?

). CGM beeps at 130, I forget to have 4U. I finally have 8U before eating dinner. Have white bread, potatoes, chicken.
930 CGM beeps again. I have 8U as I feel its going up fast.
End of story, Right now BG flattened at 152 and it will probably go down to normal. Then sleep!

Yes, I use Tresiba. I found it to be A LOT more stable for exercise than Lantus for me. And I tried them all: After ditching the pump two weeks into Afrezza, I tried Lantus, then Toujeo and ended with Tresiba. The latter worked the best, and I found it to be really stable.
It took some tweaking, yes. My goal was to use as little as possible of Tresiba. The metric was having highs at night (over 140, that is my night upper level alarm in my CGM at night). If I had several of those, I knew I was short on basal. I am now at 16U of Tresiba per day. I split 10 in the morning and 6 at night. In that way, if I ever have one of those extraordinary days where I do a new and intense exercise that makes me unusually sensitive to insulin, I skip the night dose. That is to avoid the not really dangerous but still sleep interrupting slow-mo lows that Tresiba can cause.
Other than that, it works pretty well. I prefer having the CGM waking me up with >140 at night once or twice a week, have a 4U puff and keep sleeping, but avoid lows or even worse, than having a beeper attached to my butt 24 hours a day. But YDMV

How do you correct with Afrezza if you are exercising and are at something like 140? Wouldn’t a 4 be too much?

I dont correct during exercise. What I was trying to explain above is that during exercise I just let the injected basal do its thing. My BGs will either be stable or slowly start going down. Which enables me to have 25gch usually every 30 minutes to avoid any slow-motion low caused by Tresiba.

I dont correct during exercise.

So if you are high, you just stay that way?

You can supplement with injected too. It doesn’t have to just be one or the other.

basal will eventually bring my BGs down. IIts rare for me to be high when I start exercise (my last two years A1C average since I started Afrezza+Tresiba is 5.6, with +85% in range) . But when it happens, I know that Tresiba will eventually bring the BG down. I have started running or biking session with 200 (again, very rare because with afrezza is very easy to control my BGs), usually before the hour mark the BG is below 160 or so.

I don’t like to use injected rapid because of the IOB issues. With injected there was always the unexpected, you do everything right and then something happens. With Afrezza, because its fast in/out as you know, its rare for me to get surprised and have one of those “I did everything right and what is this mother f**** BG doing there” moments.

Its really hard to control when combined with the rest of my life. And I have tried it. For 26 years. And mostly worked (A1C1 <7). But with A LOT of effort. A LOT. With Afrezza I have a level of control with so little effort compared to injected, that I am good.

I have started running or biking session with 200 (again, very rare because with afrezza is very easy to control my BGs), usually before the hour mark the BG is below 160 or so.

I would not want to run that high. When I am running, I usually correct if I get above 130.

I correct too, I just use the injected basal in my body to do it

For me it works best, as injected rapid has the risk for me of a low if I over do it. And it carries more complexity for me.
I try to really keep it simple these days, Afrezza opened a new world of little effort AND good control. So that is how I roll these days.
Cheers

@Eric, @daisymae, I am going to move all of your thread here intoDaisy Mae’s swimming BG thread

How can eat carbs if I am on an extremely low carb diet.

Hi @borijess: I think there must be a typo in your question?

Up front I will say, I am not a big believer in the low carb diet for athletic performance. I know there are benefits for some people to be on a low carb diet, but when it comes to getting the most out of your body in terms of sports, carbs are really important.

Are you on low carb for better BG control? How many carbs do you eat a day, and what type of exercise do you do?

I guess the simple and short answer to your question is - you can’t. If you want to replace carbs, you have to eat them and your low carb diet wouldn’t let you do that.

How many carbs you need depends on many things, but a general recommendation for an hour of moderate intensity exercise everyday is 2.5-3 grams per pound of body weight, or 5-7 grams per kilo of body weight.
(“Carbohydrates for Training and Competition”, Journal of Sports Sciences, 2011)

As you can see, that doesn’t fit into the low carb plan.

Welcome to our forum.

How can [I] eat carbs if I am on an extremely low carb diet.

As a fellow low carber, I’m wondering if your question is rhetorical? If not, have you read Phinney & Volek’s The Art and Science of Low Carb Performance?

Love details! Keep 'em coming! And thanks to @Gus for the write up and @Sam for the insightful comments.

I don’t know if I will ever get the hand of command+return being the send button. I am so used to it being the stupid iMessage carriage return option, it’s like muscle memory. So here’s an edit of what I meant to say…

EH is struggling with the question “what is the right amount for a MDI to bolus post exercise for a recovery drink option of around 80g of carbs?” The 80g of carbs is half of the total recovery amount of 160g, and takes into consideration all of the factors mentioned above (intensity and type of exercise, body weight, calories burned etc.). He’s bolusing for the 80g, and occasionally a correction (see @Eric’s note). He’s aiming to do it as soon as the run ends (thanks to @daisymae’s swimming thread). Then he hits the shower quickly and has the recovery drink after.

We are making a guesstimate, and sometimes it’s right, and other times it is way wrong. Any thoughts about this?

EH is struggling with the question “what is the right amount for a MDI to bolus post exercise for a recovery drink option of around 80g of carbs?” The 80g of carbs is half of the total recovery amount of 160g

We can try to work up some formulas.

Would Campbell Tomato Juice be a good refuel after a long run? Or perhaps as a snack pre-run when BG is on the low side? It has 30% Sodium for electrolytes, and 10mg carbs:

Would Campbell Tomato Juice be a good refuel after a long run?

I think it could be a good part or a refuel. But 10g is not very much.

Depending on your weight and pace, you might be burning anywhere from 500-1000 calories per hour for an easy training (non-race) effort.

Suppose you were going at a relatively easy pace and your RER was about 0.80, so you were burning 2/3 fat and 1/3 glycogen.

That means in an hour you have burned 200 calories from glycogen, and that equates to 50 grams of carbs. (These are just general ballpark numbers, not specific to you exactly.)

So that can of juice barely touches it after an hour of relatively easy work.

But I think it’s fine from an ingredient standpoint. And I also think it would be good for a pre-run snack. The sodium and electrolytes would be good. A little sodium helps you absorb water better on those long runs and can prevent cramps. So that is also very helpful.

And it also has a good ratio of carbs-to-protein (5-to-1), so from that standpoint for a post-run snack it’s also very good.

Thank you!! This is so helpful!!

I suspected the carb count would be too small, that is why I included in my question as a pre-run snack, too

I didn’t know that it helps absorb water during the run, but I always carry a big bottle of water with me. This is exactly the kind of information I was hoping for! I sometimes resort to drinking my Boost shake pre-run or part of it, if my BG is on the low side. So the Campbell tomato juice will be a good alternative and less expensive

Total surprise that it happens to have a good ratio of carbs-to-protein! I didn’t consider that at all!

On a more personal note, I am so glad you are back on this forum!!! I hope whatever you were/are up to while away, went/is going well!!

I didn’t know that it helps absorb water during the run, but I always carry a big bottle of water with me.

I use something called SaltStick. When your belly is full of water, sloshing around, it’s hard for your body to get all of that water in, and a little salt can help it absorb. But that is mainly for plain water. If you are ingesting water that includes carbohydrates, the addition of salt does not help it (it does not hurt, but it does not help, because the carbs can do that as well).

Another way of saying it, with plain water, try some SaltStick to improve it. If you drinking something like Gatorade (which has carbs and sodium), don’t worry about it. 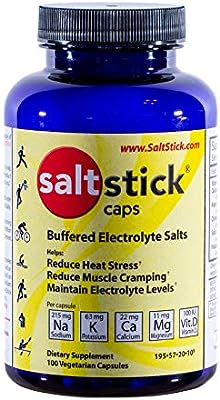 On a more personal note, I am so glad you are back on this forum!!!

Thank you so much!

I hope whatever you were/are up to while away, went/is going well!!

I hope you will enjoy reading about it here!
For the parents