We have acted upon Dexcom data many times directly without a fingerprick. My son did it again yesterday, but this time it was a mistake: he should have tested manually first. Here is why. 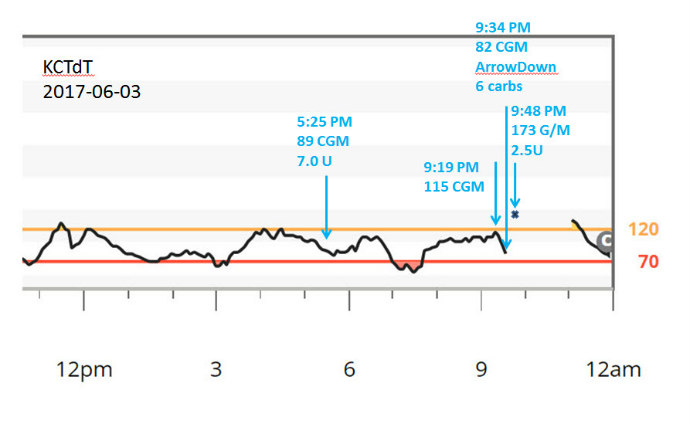 He injected insulin at 5:25 PM before dinner. Four hours later, between 9:15 and 9:34, he noticed a sharp drop from 115 to 82 over 15 minutes, with a drop rate alarm and a single arrow down sign. He immediately took 6 carbs, which was a very reasonable decision given the rate of drop.

However, since it had been 4 hours since his last insulin injection, he should have realized that such a drop, 4 hours into an insulin injection, would be very unlikely given the little IOB he had left (his DIA is 5 hours +/-). So this drop should have been flagged in his mind as a supicious drop, and required a manual check.

Sure enough, the next point was missing: his sensor had just dropped (three ???), and the sharp drop was a sensor artefact. When he tested manually, at 9:48, he found himself at 173, which is explained by the fact that:

He washed his hands a couple of times to double check, but the 175 number was real, and he had to inject 2.5U. The sensor caught up again arond 11:00pm and had to be recalibrated.

The lesson we learned: when you don’t have a lot of IOB, a sharp drop should make you suspicious, and should cause you to do a manual test before acting on the data.

The lesson we learned: when you don’t have a lot of IOB, a sharp drop should make you suspicious, and should cause you to to a manual test before acting on the data.

@Michel As much as I depend on my Dexcom, for as long as I’ve been using the Dexcom, and as much as I like the Dexcom, the lesson that should be learned is that in most instances before correcting a fingerstick is in order.

The only thing positive I see out of the FDA approval to use the Dexcom for treatment decisions is that now it will be covered by Medicare and almost all private insurers.

The only way I would attempt to use it for correction decisions is if I only used the official receiver and changed the sensor every seven days.

the lesson that should be learned is that in most instances before correcting a fingerstick is in order.

I don’t agree with that. We correct a lot without a fingerstick. It’s fine almost all the time. There are few times when we found that it is a problem. Note that the boy’s choice was suboptimal but did not put him in danger – at worst, he would spend a couple of hours high (which he did). It is simple to know when a choice may be a dangeorus one, and then a fingerprick is in order.

Being able to maintain good quality calibration is a critical part of the equation, of course.

I should mention, though, that we correct A LOT. If he is at 120 we correct. So that means that we make a LOT of on-the-fly corrections. If we only had to do 3 major corrections per day, possibly the conclusion would be different. But we frequently inject 8-10 times per day. Just as examples: yesterday 6 x Novolog injections; Friday 10x Novolog injections. Injecting now, then again in 30 minutes if he’s gone up a bit is very common for us.

@Michel I think my perspective comes from being so insulin resistant. 6 units for me would be spitting into the wind–most of the time.

Yep, mine was off by 100 points the other day. Thankfully I did a finger stick first! Mine is usually very close though until the sensor gets too old so normally I don’t do a fingerstick.

I think this is the key: We might be giving 10 or even 20 little boluses throughout the day – no way would we subject our son to a finger prick for every one. So the tradeoff would be fewer, less conservative corrections.

I recognize that we probably have slightly less tight control as a result of our decision to test less frequently. We see it as a tradeoff that’s worth it though because it allows him to be in daycare, allows us to correct quickly, etc… We also set BG carb treatment thresholds higher for the same reason.

I also think that while, yes, it’s occasionally true that Dexcom is way off without any indication, most of the time there are signs that the number may be unreliable – crazy rises or drops, wandering data points, surprisingly flat, slight drift that doesn’t make a lot of sense given what’s been eaten, compression lows, etc. For us, any time a number makes us raise our eyebrows, we test before we treat, but we dose of Dexcom 90% of the time.

most of the time there are signs that the number may be unreliable – crazy rises or drops, wandering data points, surprisingly flat, slight drift that doesn’t make a lot of sense given what’s been eaten, compression lows, etc. For us, any time a number makes us raise our eyebrows, we test before we treat,

At some point when FUD writes the diabetic rulebook, the first absolute rule should be that there are no absolute rules. Generally the over-riding rule is “it depends”.

But all that aside, for me personally, I almost always check BG, and often times I do it in multiples to see the slope. But my fingertips are immune to the lancet trauma, so it’s not a big deal for me. It’s actually worse for the lancet I think. Sometimes I have to hit it a couple times to get blood.

I almost never check my blood sugar when acting on my Dexcom, unless something seems off/weird with the Dex, but my Dexcom readings are almost always super reliable for me. I think it probably varies a lot between people how accurate it is for them. One thing I’ve learned NOT to do for myself is read much into angled arrows that haven’t been there long—they may or may not stay that way. If they suddenly show up, and I don’t have a reason to expect them, I keep an eye on them for a little before acting on them to see if something is really happening, or if it’s just noise.

One thing I’ve learned NOT to do for myself is read much into angled arrows that haven’t been there long—they may or may not stay that way.

I also find that it is much more useful to look at the curve itself. Often the curve has resolved into a different trend before the arrow(s) reflect that.

For instance, if you go from a deep drop to a sudden stable shelf, the arrow may still show a sharp downturn for several points. Case in point: 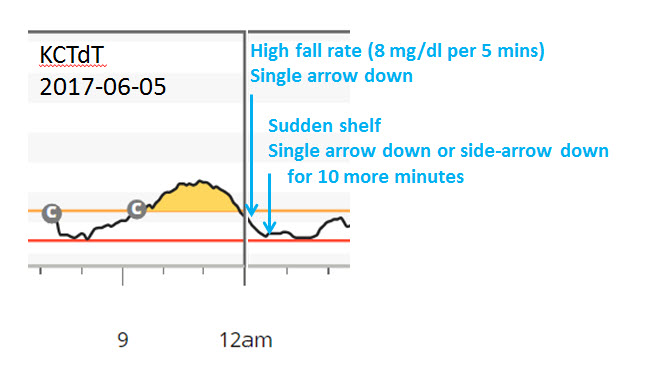 yes, for us too we use the numerical change and the shape of the curve. But at daycare, we need to give them a way to treat based on trending data that doesn’t rely on them being able to gauge a curve inflection point, or know how much it was dropping by numerically in the 10 to 15 minutes prior. So we use trending arrows there. In edge cases it causes either a missed treatment or overly aggressive carb treatment, but most of the time it works fine.

@Michel What you are describing is “momentum”, which is the key to any prediction algorithm.

Unfortunately Dexcom does not utilize a forward prediction, and only gives the arrow as a retrospective visual aid. The arrows can be very misleading.

Lulling the user into interpreting the arrow as a forward prediction is, in my view, a problem with the Dexcom.

[EDIT] I’ve been waiting all day to capture a screen shot of this in xDRIP+, with the arrow going up or down and the momentum line being relatively flat. But I’ve been too well controlled all day

I suspect, that in addition to CGM sensors lagging fast moving blood glucose, that hydration state may also play a role. We are going to try and dehydrate my son at some point to try and estimate the effect. Its just a theory, but it is my theory.

You don’t have to do that to your boy.

Trust me, dehydration totally screws the thing up!

Aww come on now, I just got my lab rat in a good place, what fun is there to have without experiments…

You should have seen the look on his face the day I mentioned that we were going to try frozen insulin. Some day he will appreciate his papa.

I know, it’s good stuff to do. I’m just razzing you.

But really, the dehydration thing I see all the time. Dex either becomes totally clueless and reflects no changes in BG, or it gives me the ??? question marks:

I prefer the ??? question marks. At least when it does that, it’s being honest. It’s not lying to me and saying it knows what my BG is!

The question marks mean that the transmitter does not understand the sensor readings for the moment. You will want to wait at least three (3) hours for them to clear. If they do not clear within that time frame, please contact our Technical Support...

As I have often told my kids, “I don’t know” is a better answer than the wrong one.

That is very true. Because Dex is sensing interstitial fluid, dehydration should have a pretty big effect, I was just wondering how to gauge it. Also, if it changes the readings it might be a big reason why some of the toddlers readings aren’t as steady as others since they would change hydration state pretty easily.

For me, anything beyond an hour of exercise and there is almost no point in looking at the Dex. And I don’t mean for rapid changes, which are always a problem, but just for any kind of true reading.

But that will depend on how well hydrated you are to begin with, how hot it is, how much you sweat, and also body tissue type.

Almost every time I have called Dexcom to report a problem, they ask me, “Are you thin?”. So I think they are kind of tipping their hand there. I think my body tissue type is not so friendly to the senors to start with. When I get dehydrated, it makes it even worse.

Not saying I want diabetes (I don’t) but I am probably the near perfect sensor substrate. (Think walrus without the beard)