OmniPod manufacturing in the U.S

I have been thinking about this a little bit. Pure speculation on my part.

Currently OmniPods are manufactured in China. There are restrictions on the encryption strength that can be used when products are made in China and imported into the U.S.

Export rule concerning technology and software is somewhat complex and not always well understood. Countries like China and the E group countries have more restrictions on encryption.

With the eventual release of the next OmniPod PDM, which will use bluetooth instead of RF, I am speculating that part of the reason the new manufacturing facility will be based in the U.S. is to enable stronger encryption between PDM and pods.

to enable stronger encryption between PDM and pods.

Which would be a pity because openAPS has just cracked the old one.

Well, the new system will be using bluetooth, so it will need to be broken again regardless. But how strong will it be?

I have heard that new Bluetooth protocols may be quite a bit more difficult to crack… Although not impossible. Hopefully by then, Omnipod will have a commercial system in place. At the very least, we could expect 4 years with the current version barring some change in their release date.

@Eric That sounds a bit conspiracy theory to me.

I viewed an investor presentation in 2016 that explained the reasons behind the on-shoring of manufacturing.

The justification was that they were increasing the automation of the manufacturing process, the labour rate differential between China and the US was getting smaller, and they wanted to shorten the supply chain (i.e. eliminate some of the ocean shipping in the supply chain).

It all seems believable.

About page 57 of the presentation…

EDIT: Not that I don’t like a good conspiracy theory…

@Eric That sounds a bit conspiracy theory to me.

Because companies always give full disclosure of all their business considerations?

Because companies always give full disclosure of all their business considerations?

@Eric, a good American would never suspect a legitimate corporation of hidden motives.

I may have to report you.

I may have to report you.

Really no need to trouble yourself. Everything is always reported.

I have a crazy theory. Insulet is motivated by…wait for it… $$$. The only reason they would change production location is because it is cheaper or faster to do so. Also, the Chinese install listening devices in all PODs so that they can surveil US citizens, obviously mitigated only by crafting an aluminum hat.

mitigated only by crafting an aluminum hat.

Or you could do like we do and live in a Faraday cage. Make sure you ground yourself before entering.

I don’t think it’s a crazy conspiracy theory to think they may want to implement better security and that was a consideration. It’s not tinfoil hat crazy.

Of course motivation is money. But security is part of that. Cracking their comms would hurt their value. Look at what happened to Animas shares when they had their breach a while back. Look at that pacemaker company that had the well publicized breach. They tanked.

a good American would never suspect a legitimate corporation of hidden motives.

There is no law that they have to reveal their motives. But I think we should alway consider possible reasons for things companies do.

For clarification, this is to what I was referring. It is called the Wassenaar Arrangement / COCOM (Coordinating Committee for Multilateral Export Controls).

Hardware and software components that use encryption as part of their core functionality are exempt. It is unclear if the new PDM would be exempt, because who knows how this arrangement would define core functionality.

Also, the Chinese install listening devices in all PODs so that they can surveil US citizens, obviously mitigated only by crafting an aluminum ha

Not true! The radio waves can’t be mitigated with a tinfoil hat - you have to use the special SkinTac that contains 2PbCO3·Pb(OH)2 which attenuates the signals.

Was the king involved in this conspiracy?

@Eric - I was thinking along the lines that the motivation was based more on $$$.

The conspiracy theory though is very plausible

however, the tiny hole that I see in the theory is that Insulet plans to continue manufacturing in China in 2019 & beyond. Now you could argue they will manufacture different pods in the US vs China beyond 2019, but I am not so sure. 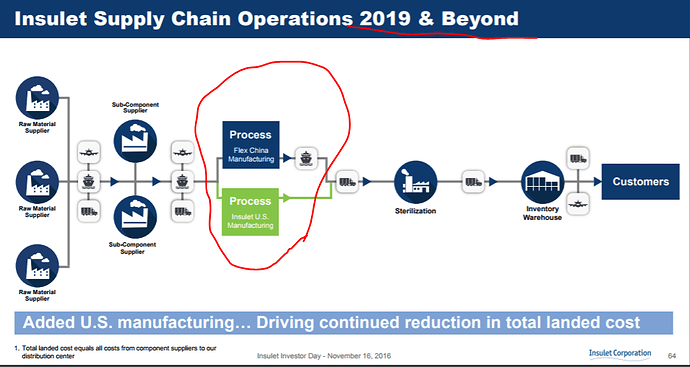 Not true! The radio waves can’t be mitigated with a tinfoil hat - you have to use the special SkinTac that contains 2PbCO3·Pb(OH)2 which attenuates the signals.

Was the king involved in this conspiracy?

Now you could argue they will manufacture different pods in the US vs China beyond 2019, but I am not so sure.

That “beyond” is not necessarily indefinite.

Current pods use RF. The new pods (with the new PDM) will use bluetooth. They will not be interchangeable or compatible.

They could make the new pods in the U.S., using the stronger encryption and also the bluetooth communication. New pods with the new PDM will no longer use RF.

And the current pods still in China, since they are already setup for that.

Once the old pods are phased out, they would have everything in the U.S.

They need to keep making the old (current) pods for 4 years after the sale of the last current version PDM, because the PDM warranties are 4 years.

Speculated release of the new bluetooth PDM is 2018. So at the very least, they would have reason to keep the Chinese manufacturing until 2022. Which is certainly “beyond” 2019.

New pods with the new PDM will no longer use RF.

Yes it is a specific and different band instead of the 433.92 MHz they are currently using.

But that does not change the fact that by law they are allowed to implement stronger encryption if they manufacture it in the U.S. rather than in China. That seems to be the key point people are missing. Is that part of the reason they are building a plant in the U.S.

There really isn’t any conspiracy in this at all. Simply speculation on trade law.

When medical manufacturers go to two locations, they are usually doing it to reduce risk of product disruptions do to things like natural disasters. For instance Medtronic switched to multiple locations of lead manufacturing after a hurricane wiped out their main plant in Puerto Rico. So they normally manufacture the same thing in both locations.