A recent trial shows that dasiglucagon, a glucagon analogue developed by Zealand Pharmaceuticals, is effective and stable when used as mini-gluc 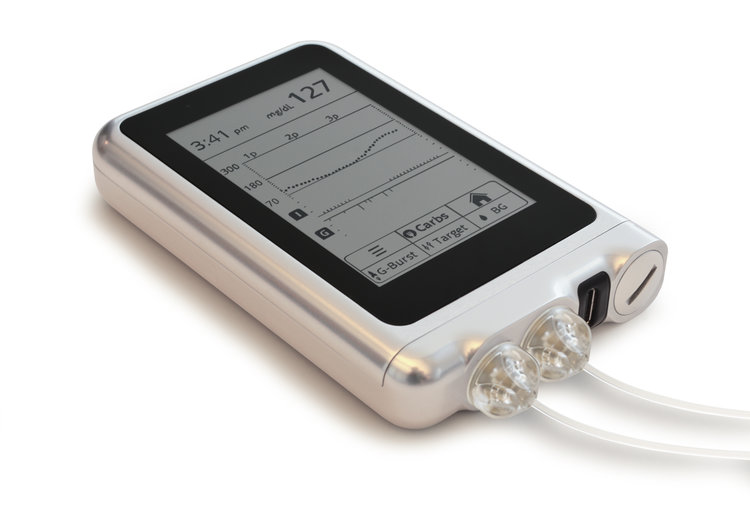 Another type of mini-glucagon is also under development by Xeris pharmaceuticals, called G-pen mini:

I think that once one of these is shown to be safe and effective, you could pretty much put it in any pump and deliver min-glucagon doses whenever a low was coming on. Hopefully one of these comes onto market in the next 5 years!

Now that would be amazing, a pump/sensor combination that could treat both sides of the equation.

I met a girl at D-camp who basically attached two pumps to herself; one for insulin and another for glucagon. Instead of treating with carbs, she mostly treated with the glucagon. She was using the old-school syringe glucagon we get in our emergency kits. Obviously, not sustainable long term because it’s too $$. Also, I’d be uncomfortable with the fibrils that form in the glucagon over time when it’s recontsituted…we don’t know how that impacts health long-term.

She said the glucagon did get unstable but that it was gradual and she just kept upping the dose over the days. Anyways, seems pretty straightforward ONCE you get a safe, shelf-stable liquid version. That is seeming closer than ever.

Cutting edge may be an all-in-one pump with an infusion site that has two needles. But the poor man’s version would be using an old pump for the glucagon and a newer one for the insulin.

I met a girl at D-camp who basically attached two pumps to herself; one for insulin and another for glucagon. Instead of treating with carbs, she mostly treated with the glucagon. She was using the old-school syringe glucagon we get in our emergency kits.

Now, that experimenter is quite remarkable. I am like you, I would be a bit worried about stability.

I can’t imagine how she could afford this treatment, though - glucagon is really expensive.

I think that if you fill all your Glucagon prescriptions in a timely manner and then stockpile them, you can have enough for an experiment – but I agree for daily life it’s prohibitively expensive.
i think ultimately the cost is what stopped it. She probably had like 6 or 7 glucagon kits and she just used them all, which was about a month of glucagon or something.
This girl was definitely a trailblazer. Man she had some stories!

This girl was definitely a trailblazer. Man she had some stories!

She would like this forum! Her experimentation makes me think of @Eric

Another type of mini-glucagon is also under development by Xeris pharmaceuticals, called G-pen mini:

I am not sure how aggressively they are pushing. I have been following them since the weekend my son was diagnosed. In over a year, I have seen or heard of no progress.

They research different types of meds. I am suspecting they have a cash crunch that may impact their ability do push glucagon through the pipeline.

Or they have no intention of pushing things through the FDA, they may be a tech development firm that is trying to find a suitor to bring it to market.

I tried using glucagon while running a few years ago. My idea was that it would bring me up quicker and not require taking in sugar. I did mini-doses with it, using a syringe.

The problem was - it didn’t work. After running long enough, your liver just laughs at you and says “sorry, I don’t have anything to give you”.

I then looked at using an insulin pump filled with dextrose, and hooked up intravenously. The problem there was volume. The biggest pump reservoir, when filled with D50, could not hold enough to make any significant difference. So that idea was useless.

They have raised about $100 million in grants and financing since 2012. It is not clear what the burn rate is, but the same investors keep piling in money in each round. It looks like they are betting on the glucagon auto-injector. If it gets approval, it could easily be a boon for the insulin using diabetic population, although the population isn’t huge, an auto-injector would be simpler than the mix and inject system currently in use, so they are looking at this as a cash cow, or easy sale I would guess.

In the last year they’ve gotten $70 million in funding: Austin---Xeris Pharmaceuticals, an Austin biotech, has raised $41 million in a Series C funding round and named a new CEO. Paul Edick has replaced Douglas

Though my impression is all of this money is going towards getting their G-pen approved, and I don’t know if that amount of money is really enough to push something through a phase III clinical trial or not. This would probably be just as expensive (if not more so) than current glucagon, of course. Still, if it’s found safe, it presumably operates identically to regular glucagon in that mini-doses are the same. In which case you could certainly contemplate using it as a mini-gluc pen at least, and possibly do some DIY glucagon usage during the day.

@Eric, yeah I’d imagine for running it’s not that useful. I think for my son though, he’s usually not operating with his liver glycogen stores on empty, so it would be tremendously useful. Also just being able to give him a glucagon injection to prevent even 2 out of 3 lows at school automatically would be priceless. If he still goes low the teachers can still give him the gummy bears or the jelly beans; just they’d have to do that less often.

Clever idea about the dextrose although I can’t see how running with an IV in would be comfortable ?

It looks like they are betting on the glucagon auto-injector.

This is what it seems like to me too. One thing I wonder is why they stopped focusing on mini-glucagon in pumps. Some of the earlier Beta Bionics trials worked with Xeris’ formulation of mini-glucagon, but now it looks like Beta Bionics is partnering with Zealand – so I wonder if there was some kind of health or safety concern with using the Xeris formulation as an everyday thing? Or if it just didn’t work all that well?

so I wonder if there was some kind of health or safety concern with using the Xeris formulation as an everyday thing? Or if it just didn’t work all that well?

That would be really helpful to know. If I was a betting man, I would say they are focusing on the auto-injector because as an emergency treatment, it probably has a lower bar to pass to be considered safe and effective, and that they will use that approval to try and lobby for a less rigorous trial on the pen formulation. Also, considering how glucagon isn’t currently used daily by most diabetics, the money that would come from the auto-injector sales will help fund the rest.

I don’t think $100 million is much in the pharma approval realm. This may be their last push before they just try and recoup some investor money by selling the IP.

well it seems like they initiated a Phase III trial in March of this year. Not sure how recruitment is going but it should be a quick one, if it’s just for emergency use. All they have to do is put people in an inpatient setting with a glucose clamp and send their BGs crashing and rescue them with the auto-injector, right?

Yeah, for the most part something like that would be a tremendous help when sitting or sleeping. But it takes so long for things like that to get developed and released, so my idea was to at least try it for the times I thought would be most beneficial. But, yeah, your liver glycogen just gets too empty after a while.

I have run with an insulin pump hooked up intravenously. It isn’t bad. I had it taped down really firmly, and it wasn’t uncomfortable.

With insulin, it’s the opposite issue - you need such a small amount of insulin when running! You have to dilute it a bunch so you can keep feeding small amounts to prevent it from clotting. I diluted it 4-to-1 to make it work.

Kind of an interesting contrast - needing a large volume for dextrose versus a small volume for insulin.

That would be my guess with what they would do, plus they probably have to demonstrate that the injector system works as intended with aging and non-optimal storage. And the most difficult test is probably demonstrating the ability of their system to deliver the intended dose within a super tight range.

I’m curious how “tune-able” this is. Would fractional units of glucagon be something that lets you dial up BG a specific amount? Could you control it enough to prevent you from having a big spike? How dependent is it on circumstances? Would your liver always respond the same way?

And the most difficult test is probably demonstrating the ability of their system to deliver the intended dose within a super tight range.

I wonder how important this is with emergency rescue glucagon. I mean 30 units is a fair amount of liquid, requiring much less precision than a typical insulin pump. Then again I think there were some generic Epi-Pens that were recently taken off the market because the auto-injector mechanism wasn’t all that reliable.

I worked for a pacemaker company, and the FDA mandated that our steroid eluting plug that is at the end of the lead deliver a super tight range of steroid, even though we had been using the old plug for 20+ years with no problems.

Why did the FDA do this? The only reason that made sense is that a competitor used a different design and had a really tight range in their steroid delivery, so they convinced the FDA this was important.

It cost the company I was working for tens of millions of dollars to engineer a new solution and resulted in exactly no patient benefit.

Many times the FDA has requirements that make no clinical sense at all. So my guess is they have established a difficult to manufacture to standard that has driven out other auto-injectors in the epi-pen space, they probably just carry those standards over to anyone using an auto-injector.