How do you keep your insulin cool every day in summer temperatures?

I posted a thread around a couple weeks ago in which I mentioned that I had needed to increase my Tresiba dose because I’d been running into highs in the evening. Increasing the dose worked great for around a week.

Then I changed to a new Tresiba pen, and I had dramatic lows every morning for several days. I decreased my dose back to the original dose, and things were working well.

I’m once again approaching the end of a Tresiba pen, and I’m running into a upward trend line (still on the decreased dose).

This is my first summer using Tresiba, and I’m beginning to wonder if the hot weather is impacting the effectiveness of the insulin. The Tresiba insert says to keep it under 86 degrees, and the hike last Saturday was around 87-88 degrees. Those temperatures are fairly common in DC during the summer, and I tend to spend a fair amount of time outside. I don’t remember having this problem with Lantus.

Has anyone had similar problems with Tresiba? Does anyone have a really, really easy way to keep their insulin cool during the summer?

Yeah, I’m not sure. Lantus was a little less consistent overall, so I suppose there’s a possibility this was happening and I just attributed it to other things.

I’m going to have to figure out a way to keep my Tresiba cool though because this variation in the amount I need to give over a two week interval isn’t working for me.

As long as the humidity isn’t too high this will work.

You only have to mess with it every couple of days. 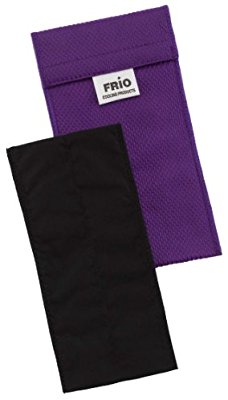 I’ve used the Frio’s with success. If I am being good I will use them for times when I am spending a lot of time outdoors during the summer when I don’t have a cooler. So that generally means hiking.

I generally spend my time in the northwest part of the continent where it is usually dry when it is hot, so humidity is never a problem with the Frios. But then again, it really does not get too hot here.

I did; however, spent time in Arizona/Utah hiking the the early summer a few years back and really all I did was kept the insulin out of direct sunlight and usually stashed it near my water bottle in my backpack. I never had problems - that was using levemir/humalog.

That pen cap is super cool!!! It doesn’t look like it’s affected by humidity either. This is a perfect solution. Thank you!!!

It could be temperature, but what you describe is exactly the problem I had with Tresiba - it would work great at first and then I’d start to go high in the late afternoon. I’d increase the dose and have terrible morning lows. I’d decrease and have the afternoon high problem again.

Not sure if this is relevant or helpful, but I ran into pen problems for months which led me to starting on Omnipod. I’d had to switch pharmacies due to insurance…and come to find out they would leave the insulin pens out of the fridge for days at a time. I would get the boxes of pens and put them in my fridge (I’d hoard them)…so it might be many months before I got to a pen that had been at room temperature for day(s) 6-12 mos ago. The pen would work for the first two weeks and then everything would go haywire. It took a while to figure out…and calling and quizzing 6 local pharmacies on insulin pen handling procedures.

People might be right that the temperature doesn’t matter…but it sure seemed to in my case.

Well, I split my dose into two injections/day, and that solved that problem for me.

I purchased the pen lid, so we’ll see if temperature is the culprit! The problem only started once it started to get warm, so it seems like a reasonable solution.

Hopefully that’s not what’s going on for me! I suppose we’ll see if this fixes the problem.

Could be temp then. Ive been keeping my Levemir pen in the fridge almost all of the time and I think I am finding it working more consistent than ever, but it could be psychological or a coincidence! It’s a NovoPen Echo with the memory screen, but the cold fridge doesn’t seem to interfere with it luckily!

This thread reminded me of a previous post from @Michel.

My T1D son and wife are getting ready to spend 2 weeks on the west coast of Costa Rica, in a place where temperature frequently reaches 100F and humidity often hits 90%+. I have been experimenting with different ways to keep insulin cool with as little risk as possible. My latest experiment is the best one, and, I think, a winner. This is what I get after leaving it exposed outside in WI heat for 24 hours (yesterday was mid-80s in shade): [KleanKanteenExpTempP2017-07-30] Here is the experiment…
[/quote]

Thanks for the link! I’ll take a look.

How does that pen lid work? have you had the chance to take it out on a high temp hike yet? I’m interested to know if it is worth the price tag as the summers here get very hot as well.

Sorry for my late reply!!!

I’d recommend using a Frio pack for the high temp hike (though there are some limitations as described in the thread Millz linked). Chris also linked the Frio pack in his post above.

I think it’s helping with my Tresiba, but honestly it’s harder to track basal insulin quirks/problems than bolus insulin. I’m no longer noticing that I need to decrease my basal dose when I change pens, but I’ve recently discovered that there may be some hormones at play in this game as well. There’s certainly a chance that the timing aligned in such a way where I convinced myself the weather was causing issues that were completely attributable to hormones!!

I’m still using the cap though. It can get so hot in the summers here, and I really like knowing that I can count on my basal to work properly.