Do you wake up for lows?

Inspired by the alarms thread. Do low blood sugars wake you up? Not the alarms, the low itself. Even before I got the Dexcom, I had trouble sleeping when I’m low. I’m a night owl and a very sound sleeper (I was the one that slept through fire drills in college) and never struggled with insomnia at all in my life. But if for whatever reason I can’t sleep, I’m always low.

I tend to have more bedtime lows from miscalculating dinner than overnight when I’m actually sleeping. But the few times it has happened, I do wake up in the 50s. I really don’t feel my lows at all and my only physical symptom is that I can’t sleep.

Actually even before t1, the night of long endurance sports endeavors were the only time I ever had trouble sleeping. Probably because I was mildly low and my reserves weren’t replenished.

Ooopsie miscalculated dinner last night and never even felt low. Was on my phone with an old friend and just kept silencing the alarms without even looking and just assumed the new sensor was acting up. When I did look, I didn’t believe the dexcom (no I didn’t double check with a finger stabber because I didn’t think of it) and just ate a couple cookies. My morning calibration was spot on so I guess it probably was correct. That kind of low is what the mini can of root beer on my night stand is for but I didn’t think of it. Unlike some, I’m never starving when I’m low. And I’m apparently way overconfident when I’m low and think I’m smarter than the dex… 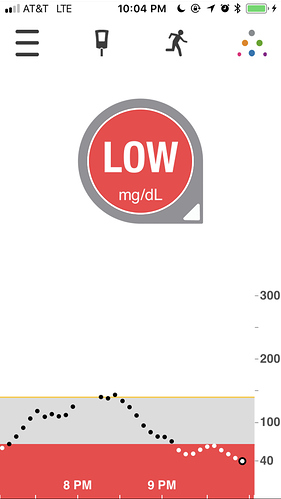 I sleep through earthquakes and fire alarms. Thankfully (for me) my wife is a light sleeper and has saved my life more times than I can count.

Since xDrip+ allows for custom alarm sounds I programmed the overnight below 55 alarm with her voice saying “drink some orange juice stupid!” It’s worked well a couple of time in the last month.

But if for whatever reason I can’t sleep, I’m always low.

I have something similar. A hypo during the night is virtually always preceded by some hours of insomnia. Just last week I woke up for a low, but I don’t know if I ever woke up for a hypo before that. If ever, it must be years ago. Since I don’t have a CGM, I can’t check if there are any hypos that I missed while sleeping.

No, I don’t wake up. If a leaf falls from a tree I’m wide awake, but I sleep through lows, until I’m floating in my own sweat or my partner shakes me awake, whichever comes first. I can count on being awake for several hours afterwards, but not before. (That should all be past tense, since now I have a CGM.)

I wake up when I am low.

Before CGM, if I was slightly low (as in 3.3 to 3.8 or 60 to 70) and was not really feeling low symptoms, I would not be able to get to sleep and would inevitably get up to test and treat.

With my CGM and insulin pump it is rare to be low at night. I have an xdrip+ alarm set at 4.5 or 80 at night and it is so fricken loud that it wakes me up and I treat. If I have my phone on vibrate, I may sleep through the alarm but will eventually wake if I drop below 70.

The last low at night was a while ago. I had changed my CGM sensor so I was CGM-less at the time. I was 2.8 or 50 and woke up on my own accord with the classic low symptoms complete with sweating and all.

I used to just keep my glucose in my nightstand, but my T1 2 year old has figured out how to into the drawer and has eated the glucose so I have to hide it on a high shelf which forces me to get out of bed to treat the low.

I’ve always woken up when low, to the best of my knowledge, sometimes via dreams where I’m eating ha, but sometimes I just realize I’m awake for no reason and then realize oh wait I’m feeling a bit off and sweaty, yup, I’m low. I also won’t be able to fall asleep at night if I’m drifting low. Occasionally as I’ve tightened my A1c, my CGM now will wake me up with an urgent low alarm before I’ve woken up, but usually that’s a very gradual drifting low, and I suspect I was already in the process of waking up, just hadn’t quite gotten there yet.

I think having a generally hyperactive/reactive sympathetic nervous system (I have problems with tachycardia etc) has been helpful for me in this respect—I’m also usually quite sensitive to lows during the day and even when my blood sugar starts to drop significantly at any level I can usually feel it (that involves only some of the low sensations, not all).

Almost never. Both as a kid and as an adult. I struggle to feel my lows during the days because my symptoms are very subtle and don’t manifest until I’m around 2.8 mmol/L, and as a kid it wasn’t unusual for me to drop to 1.9 mmol/L or lower without having a clue anything was wrong. At night, the only time I’d catch a low above 2.2 mmol/L was if I happened to wake up to pee or because I was too hot. Sometimes I’d wake up suddenly from vivid dreams to find I was low, but always by that point I’d be below 2.2 mmol/L (in the 30s mg/dl). I used to set alarms in the middle of the night frequently to make sure I wasn’t dropping low.

I had numerous instances as a kid where my parents were unable to wake me up or where I’d be totally incoherent when they woke me up, and have had a few of the same as an adult. To this day, my mom gets scared if she doesn’t see me log onto Facebook by about 10 AM and will call to make sure I’m okay.

I wake up to my CGM alarm perhaps 50% of the time. Before I got the CGM I used to suspect that I had lows that would last for hours overnight. Unfortunately, having a CGM and sleeping through alarms has confirmed that I have lows that last for 3-6 hours.

I wake for the dog, my wife rolling over, and for the snow plow clearing the parking lot across the street. Never for lows.

I programmed the overnight below 55 alarm with her voice saying “drink some orange juice stupid!” It’s worked well a couple of time in the last month.

This is the first thing that’s made me think: I should figure out this xdrip thing. Amazing, Doc!

I used to just keep my glucose in my nightstand, but my T1 2 year old has figured out how to into the drawer and has eated the glucose so I have to hide it on a high shelf which forces me to get out of bed to treat the low.

Wow. That’s a kid complication I’d never thought of. What about a child proof bottle or a can of soda? Getting up sucks.

Even if it seems I can’t feel lows (or highs) any other time (except while exercising), I’m glad I wake up! Never sweaty or anything, just awake for seemingly no reason.