Do corrections mean you're doing something wrong?

The goal I believe of all insulin dependant diabetics to have the correct basal and bolus programs dialed in so that the BG levels get as close to possible to a fully functioning pancreas… To maintain as low of an A1C as possible.

So my question to those with very tight control, low A1Cs, etc, is whether or not you still have lows and highs that you need to correct?

The reason I am asking this is because, for our 3 year old, we find that no matter what programs we set up and follow, we are either correcting highs or treating lows.

Should we care if corrections are required? By care I mean…Make program changes even if we feel our current regimen is good most of the time?

Is there a number (or an estimate) of corrections per day, for instance…For highs or lows, that may be an indicator that something is amiss with the current program (basal or bolus…Or both?)

Just trying to figure out if these corrections are just par for the course for a diabetic child (toddler atm) or does correcting one way or another mean you’re doing something wrong?

The goal…To maintain as low of an A1C as possible.

You forgot the “without significant hypoglycemia.” That, IMO, is key.

So my question to those with very tight control, low A1Cs, etc, is whether or not you still have lows and highs that you need to correct?

Because I target 83, with low variability, I test A LOT. I nudge even mild lows and highs. Snacks and corrections w/ IM injections occur daily. IMO, these are a sign of success – mimicking a fully-functioning pancreas!

I will note that to avoid correcting a hyper later, I treat hypos relatively conservatively.

Anytime it becomes predictable I think you should make a change. If you start to see a pattern, or you think “this will probably end up as a high” and it does. If the last several times you do the same thing, and you see the same result, you can start to predict it and make changes pre-emptively.

whether or not you still have lows and highs that you need to correct?

I try to correct on the trend, so I don’t see the high or low. But of course, you will always have times when you have an actual high or low because you didn’t get it in time.

That’s the way the non-diabetic pancreas works. It is always correcting. When their blood sugar starts to rise, it releases insulin. The advantage is that it releases it straight into the portal vein, so the correction is much quicker. Same with a low. The non-diabetic senses the drop and automatically releases the liver glycogen.

So the non-diabetic is always correcting, and so should you. Since we don’t have the advantage of being tapped directly into the blood stream, we just have to be a little more predictive.

So the non-diabetic is always correcting, and so should you. Since we don’t have the advantage of being tapped directly into the blood stream, we just have to be a little more predictive

This makes me feel really good. I’ve been beating myself up lately about correcting, but I think you keyed into something really important, as did @britt_j…our son may never (well, unless they find a way to stop the immune system from attacking the beta cells responsible for the creation of insulin) have a fully-functioning pancreas so we NEED to make changes on our own that the pancreas (or liver) would be making on it’s own…reading this really has made me feel better about our corrections.

My wife has noted one situation that she believes there may be a pattern (every day between 2 and 3 she believes we have to give him a snack to avoid lows)…we’ll watch this and, if there’s a pattern, we’ll determine the context (postprandial, fasting, etc.,) and make the necessary tweaks to the bolus/basal regimen.

I bet your son is not too disappointed in the 2-3 o’clock trend, because it’s a chance to have a snack. I agree! I’d rather have a snack than take insulin!

Personally, I am a big fan of grazing. For me, it’s easier to stop or correct a low or trending low than a high. So I will tend to over-bolus meals and then just snack a bit after as needed, until the insulin has run through. But that’s all just personal preference, and finding what works.

Personally, I am a big fan of grazing. For me, it’s easier to stop or correct a low or trending low than a high. So I will tend to over-bolus meals and then just snack a bit after as needed, until the insulin has run through. But that’s all just personal preference, and finding what works.

Works for me, too…

totally agree, it’s the trend. A random high once at some random time – that’s just crazy toddler hormones. A trend of highs around the same time (or after the same meal) two or three days in a row is a trend that I try to eliminate.

As long as all variables (minus internal body functions/hormones, etc.,) are the same, though. So, “time” alone isn’t sufficient to determine trends. Whether it’s postprandial, fasting, how long after eating, whether he’s sick or not any of those days, etc., All that matters when determining whether it’s a true trend. Correct? That just makes sense to me as being the case, but just making sure!

This thread reminds me that I am greatly looking forward to the next generation of pumps integrated with sensors, that do much of this work for us. The first generation won’t allow enough programmability, but in the future these algorithms should take some of the pain out of this work, and do what machines do well.

yeah the variables need to be roughly the same – but i think there’s a fair amount of art to it too. None of the data you will be acting on rises to the level of statistical significance, for instance…just too many variables. You have to be willing to make leaps and then catch them to a certain extent.

I think that’s why algorithmic approaches aren’t so great – how do you give them all the minute context to realize “oh, he actually slept in today, watched TV and didn’t go to gymnastics, and that’s why he’s high” versus some other factor.

Sick days are a different beast…after a day of unexplained highs i just put him on my preprogrammed sick day basal, then back off of it once i see a trend towards lows.

My son does this all the time too – leads to faster corrections and better Time In Range.

Careful when your CGM craps out though – not everyone can estimate BG in real time by feel like Eric.

There are just too many variables that are constantly changing to be able to get perfect numbers each time. So what to do? Well, that depends on your situation. If you have a young child–not in school, you may choose to play it tight and correct with carbs as needed. However, if you have a young child IN school, that may no be such a great idea. I am particularly interested in the autotune and autosense by Dana Lewis. 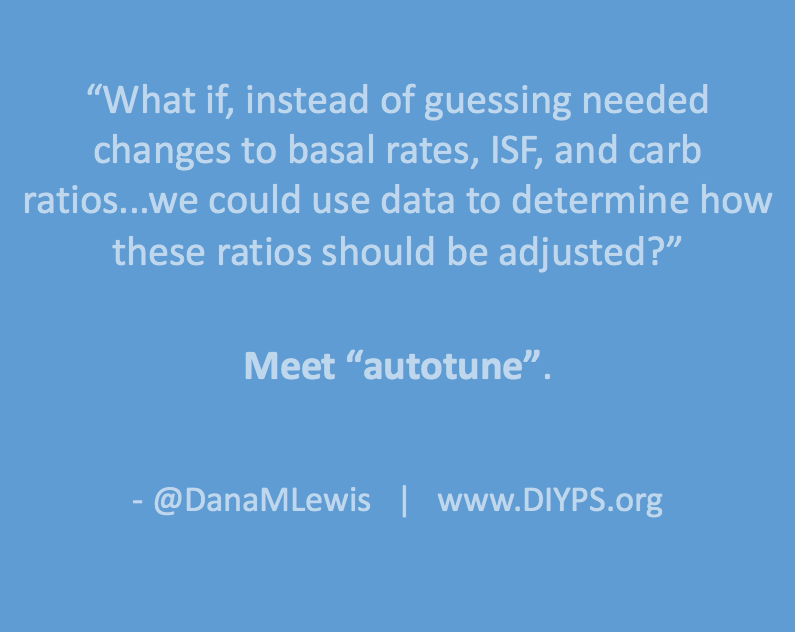 What if, instead of guessing needed changes (the current most used method) basal rates, ISF, and carb ratios...we could use data to empirically determine how these ratios should be adjusted? Meet autotune. Historically, most people have guessed basal...

There's a secret behind why #OpenAPS was able to deal so well with my BGs during norovirus. Namely,

we use Autosensitivty. It’s good but it can’t keep up with the drastic swings we see with our toddler. So for instance maybe his true ISF dropped from 265 to 230 but 265 is what we’ve programmed into the pump…Autosens uses that 265 as the baseline and it might drop you, over several hours, to 250, but it is always playing catchup as it uses several hours of data to tweak the ISFs.