Diabetes and Periodontal Disease--Part One: Overview

Periodontal, or gum, disease is one of the most prevalent diseases in America. The NIH (National Institute of Heath) and the AAP (American Association of Periodontists) report that over 50% of adults in the US suffer from the most severe form of periodontal disease, periodontitis.
And for people over 60 years of age that figure climbs to about 65%.

So, What Exactly Is Periodontal Disease?

It is defined as inflammation of the gingival tissues, gingival attachment (the fibers that attach the gum tissue to the tooth), the alveolar bone (the portion of the jaw bones that support the teeth), and the periodontal ligament (the ligament that connects the alveolar bone to the teeth). This inflammation is what makes periodontal disease especially dangerous for people with diabetes.

What Does Periodontal Disease Have to Do With Diabetes?

Studies have shown that adults with diabetes are three times more likely to have gum disease than those without diabetes. Also, the degree of hyperglycemia correlates to the severity of gum disease.

But it’s not just your teeth I’m talking about. Gum disease is a little-known but potentially deadly factor for diabetics:

So, for diabetics, preventing and controlling gum disease is critical to remaining healthy, free of complications and ALIVE rather than dead. And it’s easy - a heck of a lot easier than a kidney transplant.

Help Me! I Don’t Wanna Die!

From the NIH for all of the biochemists out there: 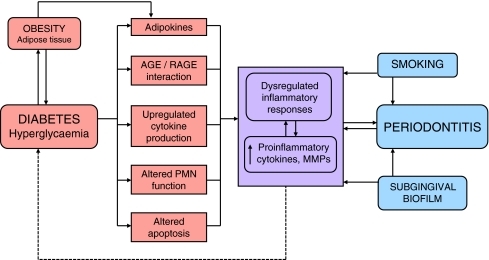 Doc, I LOVED your write-up! It is more than critical to make people aware of this - I discuss these stats with my 12-year-old T1D son at least twice a month.

I feel the point you are making is one of the most important, and least internalized or acted upon for the diabetic community. So I would love to make your upcoming wiki posts as prominent as possible - in fact, I think we should even feature them on the website as well (not only on the forum).

As a scientist and an engineer, I had no problem reading and understanding it - in fact, your writing style is what I really enjoy reading, because there is nothing I like better than precise wording:-).

Is there a risk that it might be more difficult to understand by those who don’t have a scientific background? Should we possibly make the wording a bit easier? In fact, is there a way to make it more immediate, and to make people realize the danger in a more drastic manner?

For instance, I found this to be a particularly striking part of your article:

"Epidemiological data has confirmed that adults with diabetes are three times more likely to have periodontal disease than those without diabetes. Also, the degree of hyperglycemia correlates to the severity of periodontal disease.

Would it make sense to write this in a less scientific and possibly more dramatic manner, with more of a call to action? For instance something like this (it’s a quickie write, not a model but just an idea for the direction that I mean):

"Studies show that adult diabetics are three times more likely to have gum disease than those without diabetes. Gum disease is a little-known but deadly factor for diabetics:

So, for diabetics, eliminating gum disease is critical to remaining healthy, free of complications and ALIVE rather than dead. And it’s easy - a heck of a lot easier than a kidney transplant."

Is this too dramatic? Personally, I’d love to see this as impactful as possible for someone he reads it for the first time - something that hits them in the gut. Or, possibly, another idea would be to have a scientific version and a vulgarized one?

Michel, thank you so much for the critique. Your points, particularly on reading comprehension level, are well taken.

The way I write, and the way I speak to my patients, is under the assumption that they are pretty smart. I try not to use too many ten dollar words but sometimes it just gets away from me

I think your suggestions are spot on and I’ll make the changes. They will certainly make it a better article!

I made the changes you suggested and it definitely makes it more readable and impactful.

I think that just the “vulgarized” version is appropriate. The chart and explanation from the NIH study should be enough scientific information for any geek who is interested. I don’t think for that crowd I would need to elaborate on cytokines and proinflammatory adipokines.

The chart and explanation from the NIH study should be enough scientific information for any geek who is interested.

heh - I really liked that part

I am that geek!

@Michel
Michel, how do I make this article show up on the Diabedia Wiki? I already used the wrench icon to make it a wiki, but it doesn’t show up in the wiki category.

If you look up at the top of the post, there is a pencil next to the title. It will allow you to edit both title and category