Dear UHC, similar is not the same! Humalog is NOT Novolog! 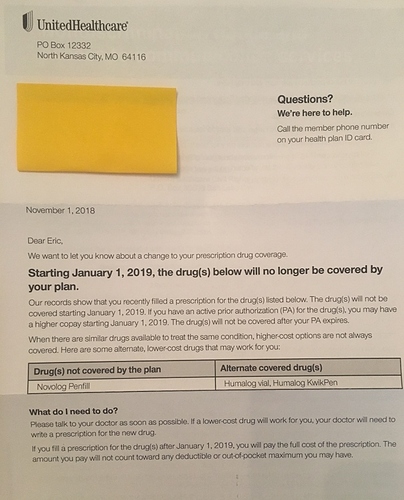 Because I’ve got nothing better to do than fight UHC at the holidays. Good times.

ETA: the back of the letter seems imply we can argue this.

I hate it when insurance companies pull this BS.

If I use my mail order pharmacy, they try to force everyone on Humalog. If I go to brick-and-mortar pharmacies, I am allowed to get any insulin.

Good luck. Maybe your endo can help out. Sorry, dude.

If I use my mail order pharmacy, they try to force everyone on Humalog. If I go to brick-and-mortar pharmacies, I am allowed to get any insulin.

That’s interesting. I don’t think my plan works that way but certainly worth checking into (CVS,Caremark). I do know that at local CVS I can use discount cards, but not with Caremark mail order.

I have used both Humalog and Novolog, and glad Novolog is currently the preferred brand. But next year could change…

That’s a bummer. I wish you well in your protest. Maybe a letter from your doctor will help?

Or, if you have high deductible insurance like me, pay cash for the insulin, where it can be had cheaply… No insurance dictating my insulin selections.

(Aside rant):. The doctor should be the one specifying the drugs, not the insurer!

The doctor should be the one specifying the drugs, not the insurer!

I hate it when insurance companies pull this BS.

Maybe this happens every year and I just didn’t know it? Because we switched to Novolog mid-year, due to the fact that it lasts longer in the Omnipod than the Humalog did for us. Either way, I doubt my insurance company ever has our best interest in mind.

We already pay an increased price for the Novolog over the Humalog cost because it’s not the preferred selection. If we do have to pay full price I suppose we’d hit the out of pocket maximum quickly? Or maybe I feel a trip to Canada coming on?

I’ll get on the letter from our CDE/Endo thing soon and see if we can resolve it. There is medical necessity in this case that’s been demonstrated. I’ll keep you posted.

We already pay an increased price for the Novolog over the Humalog cost because it’s not the preferred selection. If we do have to pay full price I suppose we’d hit the out of pocket maximum quickly?

If the non-preferred selection counts against your max OOP (potentially it does NOT)
and
If you would be hitting your max OOP during the year anyway (potentially you might NOT otherwise)
Then really it makes no difference in the total expenditures over the course of the year.

Then really it makes no difference in the total expenditures over the course of the year.

We hit our max OOP every year and I never thought of that. Duh…

Then really it makes no difference in the total expenditures over the course of the year.

Interesting! I see your point!

Unfortunately, I have no head for numbers. And generally we do not reach our out-of-pocket maximum, even despite having had the roughest health year personally on record, we haven’t hit it yet. But the insulin would blow through it in about 4 months.

I think I feel some math and my future.

It has not affected us to switch so far. But if it did we would argue medical necessity.

I do like the Novolog Echo pen better though, because it has the last dose info, and because it is a bit narrower than the Humalog deluxe pen (Luxura?).

I do like the Novolog Echo pen better though, because it has the last dose info, and because in it a but narrower than the Humalog deluxe pen (Luxura?).

That’s actually a good tip! I was reading another thread where you were explaining about filling the pod from the pan, and even though we got the Novolog Penfills, we just use the Omnipod syringe. Which is silly. We need to switch!

The first is that all this talk about hitting OOP doesn’t apply to TravelingOn because of the last paragraph in the letter shown in the original post. It states clearly that any purchase after 1/1/19 will not be reimbursed and also will not count toward any deductable or OOP maximum. So it’s a good idea, but be careful (Thomas pointed out this hazard when he raised the idea.)

The second is that I’m really surprised that UHC is only forcing this switch now: in my case they made me switch from Novolog to Humalog quite a few years ago. I guess it depends on the negotiation with each separate group plan or something.

This is grand. We have UHC, and I haven’t done a refill on my Novolog in months because I was waiting on our FSA card to be reloaded in Jan…

It states clearly that any purchase after 1/1/19 will not be reimbursed and also will not count toward any deductable or OOP maximum.

Hahahha. Amazing. Apparently in addition to bad at math I should question my reading skills.

Honestly, I came across this letter during a six hour spell of trying to pay my medical bills and they were taking all of my attention. (I never finished paying them because it takes 7-10 business days for providers to mail me itemized statements because it’s “sensitive information” they can’t provide over their web app. And there were a bunch of errors! Grrrr!)

Anyhow I figured I would re-read and plan my strategy come Monday.

Also, I thought maybe other folks might run into the same thing. But your point @bkh is probably spot on - depends on the plan!!

Don’t feel picked on just yet…
The similar letter I received about 2 months ago told me that Novolog was going to be out effective Oct 1st, 2018, and I would have to be switched to Admelog (another new similar) instead. And, no surprise, disposable pens wouldn’t be covered unless for juvenile patients, just like the previous Novolog restriction.
So far, the pharmacy is still filling my Novolog scripts, even though the deadline has come and gone.
How long that will continue is anyone’s guess. But based on past experience, one that door closes, it will take 17 crowbars and 2 dozen sledgehammers to try and get it opened again.
(i.e., doctor does all of the paperwork to contest, gets, a small extension, then has to do the same paperwork again, and again, repeat on endless cycle until doctor says “Not doing this again”)

In the meantime, I did actually get some Admelog to test drive,. and it does indeed appear to work virtually identical to Novolog, for me at least.

As in all things diabetes, your actual mileage may vary.

I’ve been using Novolog (and very recently started on Fiasp) for as long as I’ve been on a pump (since 2003) and just this year my new insurance (my employer is switching carriers/plans) is not going to cover it (in favor of Humalog) so I’m at a crossroads myself. I have a decent cushion of Novolog right now (probably ~6 months worth in the fridge - but only a couple months worth of Fiasp) and am also looking for a new job (not really due to the benefits change, though the benefits change certainly isn’t making me want to stay) so I’m trying to decide if I should jump through the hoops for Prior Auth on the Fiasp or just wait until I get a new job to start any rigmarole.

Oh, the joys of dealing with insurers…

As I Canadian, I get lost on how US insurance companies know better than you or your doctor what medications you should be using…

I have used all three types of insulin you mention and would be pretty mad if my insurance would not cover Fiasp versus Humalog. They are quite different in my experience.

Welcome to one of the wonderful perks of being an American :sarcasm:

I have Florida blue bcbs and they will not cover humalog, doc sent in script for novolog (for my pump) and local pharmacy wanted 100$ for month supply (3 vials) contacted insurance carrier who transfered me to there performed contracted pharmacy and it 125$ for 3 month supply. Now all I have to do is find a supplier for my medtronics pump supplies. Medtronics won’t sell to me says I have hold on my account. Any one no one, will probably have to try insurance costumer service, called there pharmacy, they only sell meds. Never stops does it.

As I Canadian, I get lost on how US insurance companies know better than you or your doctor what medications you should be using…

Not quite. They just know what they’ll pay for. If your doctor prescribes something “not on the formulary” you are still allowed to get it, but you must pay the price yourself rather than having the insurance pay a portion. And that price may well be manyfold higher than the price customarily agreed between insurance companies and the manufacturer. Sometimes it is possible to get a special permission to have a non-formulary item covered by the insurance, if your physician can convince the insurance company that the formulary item is not suitable in your case. But that’s a fight that you may not win.

Now all I have to do is find a supplier for my medtronics pump supplies.

Byram Healthcare can supply Medtronic pump supplies in the USA (and supplies for other pumps and for CGMs). I’ve had a consistent good experience with them over the years, although I’ve read that some folks have had difficulties. They can be reached at 877-902-9726.

You can order Medtronic reservoirs from adwdiabetes.com without a prescription. ADW Diabetes is a real company, not some dodgy darknet site. Infusion sets do require a prescription. Their phone is 877-241-9002.