What’s the current thinking on whether acetaminophen influences the G6 or not, and therefore if it should be avoided?

According to earlier discussions with Dexcom CSRs, I was led to believe that if you take less than the max (3000 mg/day) it should not affect the g6. Yet the Dex self-service issue reporting still asks if you’ve taken it. I had just asked out of curiosity, as the Dex rep who sold me on it originally had also said that issue had been fixed with the g6. I can’t take any OTC painkillers, so I have no real-world knowledge of any effect.

https://www.dexcom.com/interference
“You can take a standard or maximum acetaminophen dose of 1 gram (1,000 mg) every 6 hours and still use Dexcom G6 system sensor readings to make treatment decisions.”

They have improved the coatings that screen out the acetaminophen to the point that it isn’t really a problem for most people for small dosages. With anything your mileage may vary. Just double check (with a fingerstick) high readings shortly after taking an acetaminophen dose. Probably won’t be a contributor but could be. If your meter reads much lower than CGM after acetaminophen dose, trust the meter. The signal will go away as the drug is metabolized.

From the user guide…the facts no guessing. 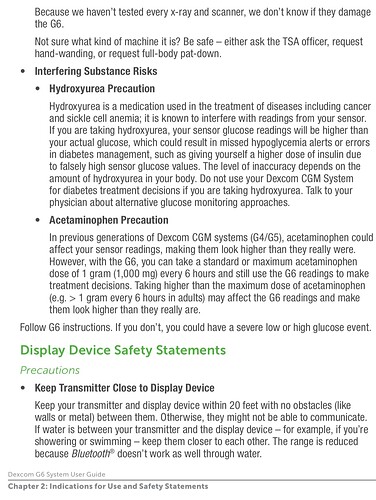 Yep, those are the facts as Dexcom has printed, however we have had members notice signal from some of the G6 sensors at lower doses of acetaminophen, and with the G5 some members were taking acetaminophen without problem. So it always a good idea to understand what it is doing so you can test/troubleshoot the issue on your own.

I’ve often “heard” of others having issues with Acetaminophen, but this is the first notice of a “first hand” experience. While I’ve tried to avoid due to warning, there have been time I’ve taken a “regular” recommended dose, with no apparent impact…at least none that caused me to check with a meter (ala @Chris ’s rec), but good to keep in mind. Thanks for all the comments!