Chloroquine and the president

I’ll only take them if I’m around mosquitos in which case they’ve been approved for decades.

It’s a simple risk /reward Analysis… risk= essentially none, potential reward=not dying. Doesn’t take a brilliant evidence based clinician to pencil that one out.

They weren’t the slightest bit controversial until the president expressed optimism about them. I see what’s going on here.

Yes dr Birx and Fauci are brilliant—- and they weighed in and said they should be fast tracked, as did the fda…

Let’s not make the main forum political. Thank you.

The reason these are all of a sudden controversial, which they never were before, is because the president has been optimistic about their potential and cnn and msnbc, as per usual, piled on their political antagonists and trolls to make it sound like he was advocating something reckless.

We all know that.

These medications weren’t the slightest bit controversial before last week
We don’t know if they work. There is some evidence they may, but not in the perfect forms we’d like to study it in which would take years. We know their minimal risks certainly outweigh the significant risks of dying.

If this translates to humans, T2s better watch out:

Fatal toxicity of chloroquine or hydroxychloroquine with metformin in mice

Guided by the principle of primum non nocere (first do no harm), we report a cautionary note on the potential fatal toxicity of chloroquine (CQ) or hydroxychloroquine (HCQ) in combination with anti-diabetic drug metformin. We observed that the...

Yeah you can overdose on anything. Nobody is suggesting for Hydroxychloroquine except cnn 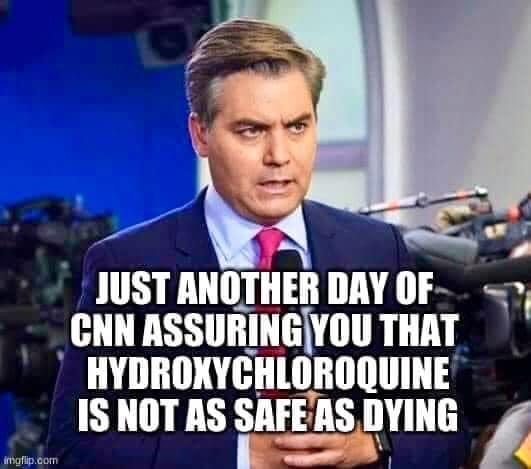