This fascinating study links the risk to develop T1 diabetes to the strength of the immune system response to gut microbiota: 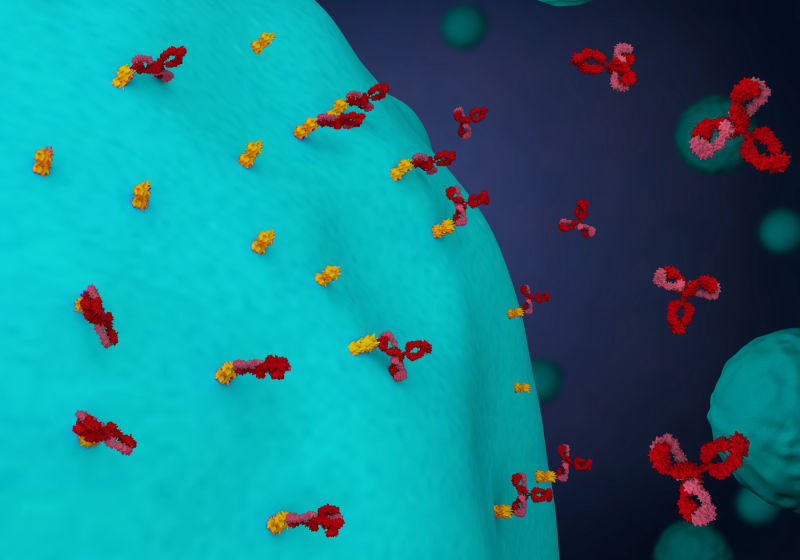 Researchers find that it's not just high-risk genes, but how children's bodies respond to their own intestinal microbiota that relates to future diagnoses of type 1 diabetes.

Type 1 diabetes is […] disease in which the immune system destroys the beta cells of the pancreas […]. Human leukocyte antibody ( HLA ) genes play a large part in how the immune system distinguishes self from non-self and people with certain variants of this gene have a higher risk of developing of type 1 diabetes. […] For children carrying these HLA variants, that risk is also linked with how their bodies react to […] [gut] bacteria. […]

To investigate a possible connection between the immune system and gut microbes, Danska and her team incubated various bacteria with serum samples from three groups of pediatric patients—healthy controls, kids with Crohn’s disease, an autoimmune disease of the gut, and children with type 1 diabetes. The 14 pools of bacteria represented strains present in a healthy human gut microbiome.

The investigators found that serum from both diabetes and Crohn’s patients contained higher levels of anticommensal antibodies (Michel’s note: i.e. antibodies to gut bacteria) than that of healthy controls.

Again, imho we see a here (a) a possible link between diabetes and gut biome, and (b) a possible way to predict, and maybe someday prevent, the development of T1 diabetes for some people. We are seeing more and more of these links in recent research.

Link to the article abstract: http://immunology.sciencemag.org/content/4/32/eaau8125

The full text is not available at this time without subscription.

I’ve wondered about this sort of thing and whether it is relevant to the fact that six months after my T1D diagnosis, I experienced 18 months of mysterious GI issues that three different gastroenterologists could not figure out. Being a newly diagnosed T1D at 21 years old and doing a lower scope with no answers, then an upper scope with no answers, and TONS of lab tests and trying different medicines and gluten free…seemed more than coincidental. But no one figured it out.

six months after my T1D diagnosis, I experienced 18 months of mysterious GI issues

I wonder if you had GI symptoms sone time before your diagnosis as well?

I wonder if you had GI symptoms sone time before your diagnosis as well?

I’m racking my brain and I don’t believe I did. And they were SUCH severe symptoms and came on with a vengeance I don’t think I’m misremembering that.

Oct 2005: Diagnosed as Type 1.5. (That’s what they said. I’m sure someone on here is laughing.)
April 2006: Started insulin. I couldn’t accommodate my dwindling organic insulin with diet and exercise any longer. This was also when I said goodbye to my career. Memorable time! And was wedding planning, too!
Oct 2006-late 2008: GI issues and treated like a lab rat.
Late 2008: Started eating yogurt daily. GI issues were fixed.

I’m not saying magic foods fix major health problems. I typically don’t buy into that sort of thing. But I WISH my doctors would have mentioned, “Hey…do you ever eat yogurt? Maybe we should try that before we keep sedating you for invasive tests…”

If I don’t keep up on yogurt consumption, it seems that things get unsettled again within a week. Maybe that’s all placebo…which is what the gastro’s told me…but I replied, “I’m pretty sure if I could get my body to stop to doing this by just thinking about it, I would have accomplished that by now.”

I love that part

And—that also happened to me. Now yogurt is a thing I make sure to have plenty of.

If I don’t keep up on yogurt consumption, it seems that things get unsettled again within a week.

Same, though I take a daily probiotic pill (daily yogurt is so expensive when you’re dairy free!), and I notice when I stop taking it. Actually, I’ve spent the better part of the past 48 hours miserably nauseated because I’m on antibiotics…messing up gut bacteria again…

This article is very interesting to me, as someone with a couple GI disorders, celiac disease being one of them. Looking back, I believe t1 was triggered at the latest halfway through my first pregnancy (based on some wonky BG numbers while testing in the 3rd trimester). Since I was diagnosed with CD 3 months before I got pregnant, they could have been triggered together, or one after the other (t1 being 2nd). I knew there was a higher rate of comorbidity of celiac disease and t1, but I assumed it had everything to do with genetics (since both are linked to those HLA genes).

I also had taken multiple rounds of antibiotics for a sinus infection (that was eventually discovered to be fungal) in the year or two prior to my CD diagnosis. Interesting.

Your conclusion cracked me up!

Are they in Trialnet btw?

It was mostly a joke.

I signed them both up when my son turned one, but their boxes are still sitting in a closet…both of them have had unpleasant hospitalizations and blood draws in the past year, so I’ve not been able to bring myself to take them in for another.

It would not be a bad idea, though.

It really wouldn’t be a bad idea, especially since my daughter has already had an immune-mediated condition (that we’re hoping is now gone - she hasn’t had a flare despite usual triggers in several months), and she did have a couple of 175-200 BG readings during all of that. I’ve kept an eye on her BG since then, but it’s been completely normal during those random spot checks (both fasting and post meals of various carb quantities). ETA her A1c was checked then, and it was in the 4s (can’t remember exact number).