I often look at my son’s CGM wondering what is really happening with his BG, and how it correlates to his CGM. Yesterday morning (Saturday), around 3:00am, I had a chance to catch a microspike that I was able to measure on his regular glucose meter, in parallel with his CGM: 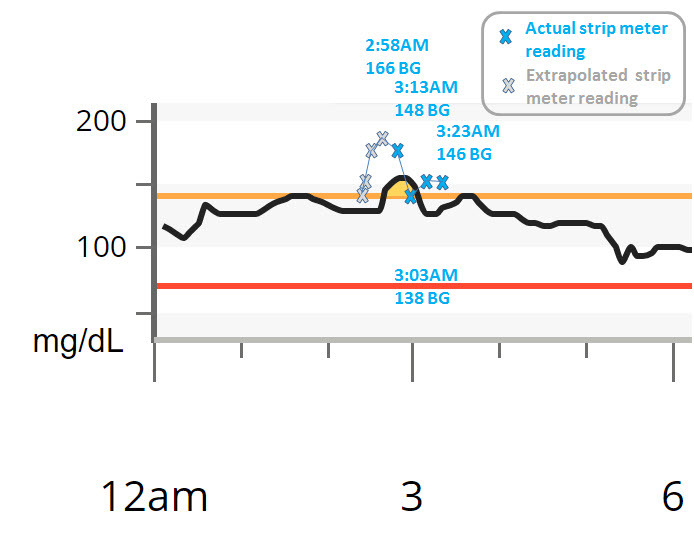 I measured 4 BGs by hand over approximately 25 minutes, from 2:58am to 3:23am (the blue crosses on the trace).I guesstimated a few points that I missed at the beginning of the spike, to show what I think really happened. These are the points that I found interesting:

By the way, his final drop, past 5:00am, is due to a correction. This brings another interesting point: his most active insulin phase normally starts about 40 minutes after injection these days - but at night it comes quite a bit slower. He injected a correction at 3:28am, on that little plateau, but you don’t see him really turn the corner until about 5:20.

I agree with these two points completely and this is part of the reason so many people are surprised that their actual A1C is not as low as the Dexcom A1C prediction! The Dexcom doesn’t catch the full extent of highs, and over-amplifies the lows.

As for why this happened, I’d be willing to bet that he had a hard practice earlier that day, and his body was pulling the blood glucose to replace his carbohydrate stores. Yes on practice?

I’d be willing to bet that he had a hard practice earlier that day, and his body was pulling the blood glucose to replace his carbohydrate stores. Yes on practice?

Another sign that this is not the case, btw, is that you don’t see a slow but progressive drop for multiple hours prior. I really don’t see a good reason why this microspike resorbed itself on its own, one of the daily mysteries of diabetes.

I think, however, that it may be related to something that I have argued over with our endo. It appears to us that not all BG peaks are created equal, and that some types of peaks require much less insulin than others. Our endo totally disagrees.

For us, big night peaks are typically heavy users of insulin, but some day peaks (NOT related to food) seem to require much less. Night correction factors are typically 1:38 right now for us, as well as food peaks resulting from carb miscount, but many day peaks (stress related typically) require a 1:70 or a 1:80 correction for us. This may be related to something I read in Steve Ponder’s Sugar Surfing, where he mentions that some of his stress peaks only need 1/2 as much insulin as “regular” peaks.

It appears to us that not all BG peaks are created equal, and that some types of peaks require much less insulin than others. Our endo totally disagrees.

Your endo is totally wrong about that.

I see frequent little ups-and-downs on my CGM. Part of that could be anomalies in the readings, and the other part I do think for me is just related to normal biology, the body pulling sugar out of the blood and storing it.

This is interesting stuff.

Just a brief reply to say this is a tremendous catch…and so reflective of my wave pattern too. The CGM often cuts the peaks off for me. The peaks and the valleys, actually, and presents much flatter than I usually am. Thank you so much for this detailed post!!

Also, your son is a superhero for tolerating so many sticks in the middle of the night. And you guys for being up to analyze them!

your son is a superhero for tolerating so many sticks in the middle of the night.

He did it for his dad

He knows I love data… He is a good kid! But this was really instructive for the two of us in the end.