Does anyone have children who has had this? Erin and I have noticed that Liam has had loose stools for at least a month now. She’s going to make him a doctor’s visit now that we’ve determined this just isn’t normal. I was reading an article from the National Institute of Diabetes and Digestive and Kidney Diseases that there could be a small intestine infection that’s resulting in his gas/loose stools

He doesn’t have the weight loss, but does have the diarrhea, gas and on occasion, he complains of his stomach hurting.
Also, although he’s never had any abdominal surgery, he was born with an umbilical hernia.

The same article speaks of something called “Toddler’s Diarrha” and it reads:

Toddler’s diarrhea. Toddler’s diarrhea— also called functional diarrhea or chronic nonspecific diarrhea of childhood—is
a common cause of chronic diarrhea in toddlers and preschool-age children. Children with this disorder pass three or
more loose stools a day and do not have any other symptoms. They typically are growing well and gaining weight, and are healthy. Toddler’s diarrhea develops between the ages of 6 months and 3 years, and it usually goes away on its own by the time children begin grade school. Researchers think a diet with too much sugar—such as the sugar found in
fruit juice—relative to the amount of fat and fiber may cause toddler’s diarrhea."

He doesn’t drink much juice at all anymore since we’ve started using glucose tabs, but this sounds like it more closely resembles him possibly.

I would run the full Celiac Panel.

(not the genetics - just the traditional tests included in the panel)

To look for Celiac Disease? What all would this panel test provide, or be looking for?

I think the umbilical hernia is not connected.

We had this problem before with both of my sons, at a time when neither had D. We cured it by giving them a lot of yogurt every day. I think their intestinal flora had somehow gotten damaged. But, of course, there are so many possible causes that it is hard to say. I would not worry though, these are very common things for kids, totally independently of diabetes.

There is a bunch of research coming out right now that intestinal flora is somehow connected to D, so possibly there is a story when you connect the dots somewhere.

We’ve taken our son to doctor many times for this, including several 500 mile drives to the nearest pediatric Gi specialists and have been told repeatedly “this is normal toddler diahrea” even when we tried to insist it didn’t seem anywhere near normal… was further confused by all the well known but unproven patterns of autism and intestinal problems which the medical establishment basically don’t acknowledge. In my experience if their growth and weight is on track they will not take you very seriously. Good luck.

Maybe we’re just overly worried. He hasn’t always had loose stools…only for the past month or so and that’s more of why we’re concerned. They seemed to come on, then just not stop.

that’s more of why we’re concerned.

If his pediatrician does not find anything wrong, maybe you can also give him some reputable probiotic pills with a diverse range of cultures? Some of them have only one or two, while others have 10-20. The amount of cultured cells varied widely too: more is better.

Has he had antibiotics recently? I also second a celiac panel (unfortunately it’s common along with t1) - which involves testing for several antibodies - probiotics, and maybe consider testing for certain bacterial overgrowth issues - c diff, h. pylori, maybe even Candida. My doctor has noticed that nearly every patient she has with autoimmune issues has an overgrowth of h. pylori (some plus more), which she has theorized further drives autoimmune processes, if not triggers them (I’m still on the fence on that).

No antibiotics lately, but we will set up an appointment soon if it doesn’t clear up and get those tests ran! We’re going to take a few steps ourselves first to try and get nip this in the bud…get him on a probiotic + make sure he’s eating foods such as yogurt (which he doesn’t like much) that can help fight any bacteria that may be in his gut, as well as foods that will help in thickening his stools.

Like others said I would get him checked out for celiacs (gliadin antibodies and Tissue Transglutaminase Antibodies ) but I would also have them run a typical stool sample for infectious agents. I went to India once, had no real symptoms there, but once I got back had a chronic Campylobacter jejuni infection that required antibiotics, and the symptoms were similar – gas, loose stools, vague tummy pain.

Also second what @Michel said, which is that once your gut flora gets disrupted for whatever reason, it can sometimes take quite a while to recolonize with healthy bacteria. L. acidophilus in yogurt (or via supplements) can be very helpful in this regard. My husband became lactose intolerant for about 2 years as a result of a bad stomach bug and had similar symptoms – it eventually resolved when his gut was recolonized by the bacteria to digest lactose… (some people are actually lactose intolerant genetically but the microbes in their gut do the work for them; once those microbes are gone they develop symptoms). To rule that out, you can try switching temporarily to something like Lactaid or equivalent lactose-free dairy products, and see if the symptoms resole.

Basically any disruption in gut microbes can cause prolonged symptoms of gastrointestinal distress.

I suspect that disruption in the mucus barrier in the gut may be initially a risk factor for the autoimmune process in diabetes – but that would have already done the damage years ago.

Hope this resolves quickly. I think that we parents notice all these changes in our childrens’ bowel movements and that they DO signify something, but that medicine just isn’t equipped at this point to tell us what, exactly, they signify.

So yesterday we put him on probiotics and he spiked to over 300 (doesn’t ever happen these days)…same today. So, tomorrow we’re going to double the up front dose to account for whatever is in this that’s causing his sugars to spike so high. If that doesn’t slow it down, we’ll triple it the next day…until that insane spike stops.

Interesting - here are the ingredients in mine(left) and kiddos (one a liquid, one a powder). Looks like they can have sugars and/or starches, fun. I never thought about probiotics being an issue - just the sugar coated vitamins/pills! 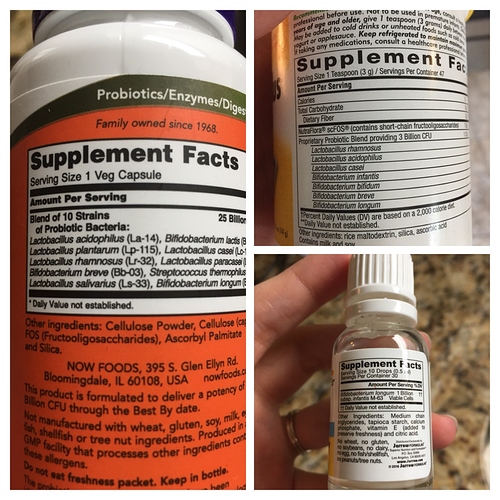 Harold, I never realized it may have sugar either. Jeez, I’ll have to be more careful next time.

Erin found out that the Dex glucose tabs can cause loose stools / stomach aches so we’re going to see if we can lose those for a few days to see if things improve.

So, his GI appointment was this morning…here’s what we found out.

Erin and I had both noticed his stomach over the past weeks seem larger, harder and distended…we weren’t sure what to think of it.

The Doctor gave him one look, felt his stomach and said he is VERY constipated. Once someone becomes overly constipated, they will secrete small stools, most often loose. She believes this is the reason he is having all the issues with his loose stools. His stomach is large and hard.

Erin and I didn’t consider constipation because…well, he WAS pooping many times per day, but usually only as a result of passing gas and usually in very small quantities.

The doctor also had to stick her finger in his anus to see if his anus is big enough to pass stools. She said that it felt OK, but at this point she isn’t ruling out “Hirschsprung disease”… Hirschsprung disease involves missing nerve cells in the muscles of part or all of the large intestine (colon). Present at birth, it causes difficulty passing stool.

So here’s what we have to do (in addition to his normal D routine).

IF, in February, this issue isn’t fixed, she will need to consider doing both an Endoscopy (test for celiac) and a rectal suction biopsy (to test for Hirschsprung).

So, although I’m looking forward to him “getting some relief” with his stools…I am SO frustrated that he is already dealing with so much and has to now go through this. When we had to give him his probiotics, he HATED it…so now we have to give MiraLax for the next 2 months and he’ll hate it also. I just wish he could get a break. Diabetes isn’t enough already???

So that’s where we are right now. I appreciate all the suggestions from everyone

I have a fear of any procedure that requires anesthesia because there is always a requirement that the child does not eat after a specific time on the previous day. Well, that’s not possible with a diabetic toddler! How does one manage this??? The last thing I want is for some action I took to care for his diabetes somehow caused negative effects during a procedure.

Definitely a question we will ask our doctors, but this is scary if he’s required to be put under for some minutes/hours

Sorry you are going through this, but glad you are getting some answers—here’s hoping the meds clear him out and that solves it.

Yeah, I think you just basically need sugar water on hand, probably that isn’t strongly colored (red coloring is particularly problematic for those kinds of scopes usually). So even popsicles and jello can be ok sometimes, but again, you’d need to check with the doctor for specific requirements for those procedures. I’m sure they will be able to come up with a doable strategy, and your endo/NP may also be helpful.

Sorry to hear about all that.

But at least getting some information hopefully helps to move you all toward improvement at some point.