I need to quote a good bit, because it is so shocking (the bolding is mine):

"During his videotaped deposition in October 2016, [Aetna medical director] Iinuma – who signed the pre-authorization denial – said he never read Washington’s medical records and knew next to nothing about his disorder. Intravenous immunoglobulin can cost as much as $20,000 per treatment. It helps patients like Gillen Washington stave off infection. Questioned about Washington’s condition, Iinuma said he wasn’t sure what the drug of choice would be for people who suffer from his condition.

Iinuma further says he’s not sure what the symptoms are for the disorder or what might happen if treatment is suddenly stopped for a patient. “Do I know what happens?” the doctor said. “Again, I’m not sure. … I don’t treat it.”

Iinuma said he never looked at a patient’s medical records while at Aetna. He says that was Aetna protocol and that he based his decision off “pertinent information” provided to him by a nurse. “Did you ever look at medical records?” Scott Glovsky, Washington’s attorney, asked Iinuma in the deposition.
"No, I did not," the doctor says, shaking his head.'

“So as part of your custom and practice in making decisions, you would rely on what the nurse had prepared for you?” Glovsky asks.
“Correct.”

Iinuma said nearly all of his work was conducted online. Once in a while, he said, he might place a phone call to the nurse for more details. How many times might he call a nurse over the course of a month?
“Zero to one,” he said. […]

“Oh my God. Are you serious? That is incredible,” said Dr. Anne-Marie Irani […] a professor of pediatrics and internal medicine at the Children’s Hospital of Richmond at VCU and a former member of the American Board of Allergy and Immunology’s board of directors.

“This is potentially a huge, huge story and quite frankly may reshape how insurance functions,” said Dr. Andrew Murphy, who, like Irani, is a renowned fellow of the American Academy of Allergy, Asthma and Immunology. He recently served on the academy’s board of directors."

The excerpt is taken from:

California's insurance commissioner has launched an investigation into Aetna after learning a former medical director for the insurer admitted under oath he never looked at patients' records when deciding whether to approve or deny care.

You can also find the report on Forbes and Fortune: 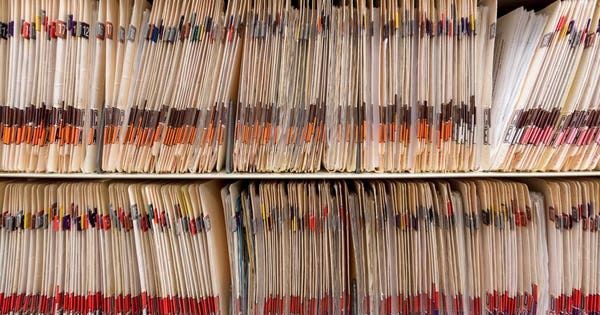 In an eye-opening exclusive reported by CNN, it was revealed that a former medical director for Aetna admitted under oath that “he never looked at patients’ records when deciding whether to approve or deny care.”

The former medical director claimed that he was following his training provided by Aetna.

Did anyone ever actually think they did? I’m certain that this is standard practice… he works for the insurance and his job is to verify their policy not to overrule it… unfortunately

Does anyone really think that the insurance companies are in business to pay claims? It’s actually the opposite. They do better when they don’t pay claims.

I hope this lawsuit is wildly successful to give the insurance companies some added incentive to pay valid claims.

Does anyone really think that the insurance companies are in business to pay claims?

I know you are right. But it boggles my mind that a medical director, whose job is to do pre-authorizations and rule on appeals, would never have read patients records, not even once. It is so disturbing that … I am really disturbed

I remember countless times growing up my mom (MD) being furiously frustrated by having to argue with a receptionist at an insurance group about whether or not a treatment for her patient was medically necessary. She was never allowed to communicate directly to the insurance review physician.

I expect this is widespread among insurers. I’d like to see a few state insurance commisioners also take some heat on this. They are tasked with pre-approving these insurance company policies and always have been. In the case of Aetna or any insurer, if you give them an inch they will take a mile. The regulators are supposed to know that.

I contend that this grandstanding Jones in CA should have caught Aetna a long time ago. Better late than never should be his next campaign slogan.

I am perhaps more naive than other users in that I thought a doctor might eventually look at the case records, if the patient pushed hard enough and was persistent enough. Really infuriating.

I know doctors are just people, but they also take an oath to do no harm. It seems mind-boggling that a medical director could sleep at night knowing he was signing off on work someone else less qualified assessed, and potentially endangering peoples’ lives as a result.

The story is a bit confusing. I don’t think we’re getting the whole picture. It sounds like Aetna said he needed bloodwork done because it had been 3 years since he’d last had bloodwork done. I don’t know anything about his condition, but if they’re forking out $20,000 for each treatment then it seems pretty reasonable to require that the patient get bloodwork done regularly.

"Aetna has rejected the allegations, saying Washington failed to comply with their requests for blood work. Washington, who was diagnosed with common variable immunodeficiency, or CVID, in high school, became a new Aetna patient in January 2014 after being insured by Kaiser.
Aetna initially paid for his treatments after each infusion, which can cost up to $20,000. But when Washington’s clinic asked Aetna to pre-authorize a November 2014 infusion, Aetna says it was obligated to review his medical record. That’s when it saw his last blood work had been done three years earlier for Kaiser.
Despite being told by his own doctor’s office that he needed to come in for new blood work, Washington failed to do so for several months until he got so sick he ended up in the hospital with a collapsed lung.
Once his blood was tested, Aetna resumed covering his infusions and pre-certified him for a year. Despite that, according to Aetna, Washington continued to miss infusions.
Washington’s suit counters that Aetna ignored his treating physician, who appealed on his behalf months before his hospitalization that the treatment was medically necessary ‘to prevent acute and long-term problems.’ "

@Katers87 Thank you for pointing this out.

This patient seems less than compliant in this case, but that does not mitigate the insurance company’s alleged behavior in their approval policy. It is still s breach of ethics to not look at a patient’s medical records or issue denials if the reviewing doctor is not familiar with the condition or its treatment in question.

It sounds like his records were reviewed at some point though because the insurance company asked that he undergo additional bloodwork based on his records indicating that it had been three years.

The director may not have reviewed his medical records despite him being the one who issued the requirement to get additional bloodwork to get pre-authorization. However, the story has been sensationalized because there was a way for the patient to get the care he needed, and it appears that he chose not to comply.

Insurance companies cut costs by having procedures and policies in place that, as I understand it, are defined by medical professionals. I’m not really surprised that doctors don’t review each case individually but rely on policies when making pre-authorization decisions.

I think the question of whether this particular patient was denied care appropriately is irrelevant…the underlying issue, that the medical director NEVER even glanced at these records (not just this guy’s, but anyones!) for review, is just mind-boggling.

Still seems like he should’ve needed to review them for odd cases though. I still think the article has sensationalized the situation a bit.

Insurance companies cut costs by having procedures and policies in place that, as I understand it, are defined by medical professionals.

My gripe is that state insurance commissioners in CA were in a position to review these policies but apparently were asleep at the switch! In this case he testified that Aetna had this policy at least since 2012. Why didn’t the regulators catch Aetna and force them to have a more ethical policy?

The reason this is a hot button for me is I reviewed available medical policies from various insurers when appealing with my insurer for CGM coverage. These medical policies that affect coverage decisions are all over the board and many were obviously edited by bean counters. Why don’t or won’t the state insurance commissioners clamp down on these self-serving “medical policies” used by insurers and force some uniformity on defining “medically necessary” so our doctors will not have to play whack a mole with these denials?

In this case he testified that Aetna had this policy at least since 2012.

I agree that it would be nice if medical necessity was defined uniformly among insurance companies.

The CNN article says he “served as medical director for Aetna for Southern California from March 2012 to February 2015, according to the insurer. During the deposition, the doctor said he was following Aetna’s training…” and Mr. Jones of CA insurance regulatory fame says "it’s troubling that “during the entire course of time he was employed at Aetna, he never once looked at patients’ medical records himself.” "

The press and plaintiff attorneys might be stretching the facts here, I don’t know. But if the facts as stated are correct, I will direct my gripe against the Insurance Commissioner. I wonder how many complaints about denial of coverage were received by the insurance commissioner during this time frame? How could they represent that they are regulating the health insurers if they are not adequately investigating these complaints? He or his predecessors apparently gave Aetna an inch and they took a mile…or they were asleep at the switch.

It’ll be interesting to see what the Insurance Commissioner finds! I wonder how long the investigation will take.

During the deposition, the doctor said he was following Aetna’s training…

I find this quote troubling. The insurance company trains the doctor on how to determine if a treatment is necessary? Although I find it troubling, it doesn’t surprise me at all. I have no faith whatsoever in this system, or in the insurance commissioners ability to make it right.

I think the medical director was the problem. He’d likely blame Aetna in any case because it reduces his liability.

I suspect his practices are pretty much standard throughout the industry, unfortunately… I suspect that’d become very obvious if they actually investigated, I suspect once they realize that’s the case… the investigation will just fizzle our and we’ll be back to square one and nothing will change

I agree that it would be nice if medical necessity was defined uniformly among insurance companies.

Call me crazy but I don’t want that. My guess is that all insurers would then define medically necessary to the lowest common denominator, and people with rare/confusing diseases or other conditions that are expensive yet not imminently life-threatening would be out of luck.