For the past couple of weeks, I have been experimenting and playing very actively with temp basals to prevent lows. Some of my motivation is that my son has gained quite a lot of weight lately – he is still very thin but I wonder what is due to crazy growth and what is due to too many lows.

I have been able to prevent a lot of lows. I think we have probably decreased our night time carb consumption by 75% in the past 2 weeks: the difference is very significant. As usual, the cost has been time spent up playing with the PDM at night

As I learn to deal with it better, I expect that I will be able to decrease the amount of time required to make this work.

I do not have an established MO for decreasing or suspending insulin yet, but I am slowly getting there. I think I will have a decent regiment with a few simple rules in another few weeks.

Some other things I don’t quite have yet. For instance, I have not quite been able to figure out exactly what will cause an out-of-control peak from too long an insulin suspension. I can reliably get the BG to go up, but I don’t quite know how much is too much

Hopefully, in a few weeks I will have figured out a decent set of heuristics

Some of my motivation is that my son has gained quite a lot of weight lately – he is still very thin but I wonder what is due to crazy growth and what is due to too many lows.

As your son is extremely active, I would 100% expect the mentioned weight gain is due to impending height increase and probably a very good thing to be happening.

Since switching to Fiasp I’ve been using temp basals much more to prevent lows. I find that changes kick in within 30-45 minutes, at least the start of them, so I’m able to tell relatively quickly whether my predictions are correct. I know that Fiasp doesn’t work faster for some, but for me it’s significantly faster, and it makes a huge difference. I find that my blood sugar rises by about 1.5 to 2.0 mmol/L for every 30 minutes of no insulin. I’m doing an internship program right now with lots of walking, and I’ve been eating glucose tablets to try to prevent lows because my brainpower is focused on what I’m learning, but I’ve got to get back to using basal in these situations. I find that anything over 45-60 minutes is usually too long of a suspend for me and I’m apt to skyrocket. This has always been the case, but it seems to have gotten worse since switching to Fiasp, probably because I find its action time so much faster and so it probably wears off significantly faster (I have my DIA set to 3.0 hours).

This is really the only reason why I would consider using a pump. The most trouble I’ve had over the years with lows on MDI almost exclusively occurred because of basal.

Tresiba, thankfully, has allowed me to dial in the dosage to control this. I still go low, but now I can ascribe this to overdosage of Novolog.

This is really the only reason why I would consider using a pump.

Variable basal rate was our main reason to switch to the pump. A bunch of other benefits but those were secondary to the basal.

Is this a standard practice everyone else also follows? Or do some use them for current lows or highs?

Perhaps some would treat a high with both a bump up in basal AND a bolus, but I don’t do that. Reason being, any bolus given now is going to be trickling through my body for several hours, so this is kind of like an increase in basal at the same time anyway.

Just curious how others do it.

I have done with with a persnickety persistent high…the basal bump does seem to help.

I have done with with a persnickety persistent high

Sure, I can understand a bump up in basal for something persistent, like if you are sick, have hormone spikes, or an infusion site is not working well. Things where you keep going high for a particular reason.

Do you ever use it for something more like a “food-driven” high?

I have been experimenting and playing very actively with temp basals to prevent lows.

Are you reviewing previous lows in Clarity to see if there are any patterns? For me, several days in a row of more-than-usual exercise cause me to go low.

Note to self: replenish carbs!

Is this a standard practice everyone else also follows? Or do some use them for current lows or highs?

I wouldn’t say it’s standard practice for me, but I have decreased the basal for stubborn lows that aren’t symptomatic. Using a formula that I believe is @Jen’s, I count on going up 1 mmol (18 mg) for every 20 minutes at 0 basal. It’s proven useful, especially as I’m inclined to overtreat. I’ve experimented with highs, usually the ones that result from poorly calculated extended boluses for HFHP meals, but I think I prefer to hit those with boluses. Less math, less risk of crashing hours later.

I only use it during lows if they persist for hours without coming up. Beyond short 0% basals of about 30 minutes things get tricky and it’s easy to overshoot by a lot.

Today I suspended my pump for an hour because my blood sugar has been unstable lately and I was nervous of a low. Instead, the hour without insulin caused me to shoot up by about 5.5 mmol/L.

I find that since going low carb and with Fiasp I’m way more sensitive to interruptions in insulin delivery than I was before…I’m not entirely sure why.

@michel I find that I use 0% Temp baslas a lot.

I use Fiasp. I find it to be a lot faster than Humalog and I see the change in basal around 1/2 hour to 3/4 of an hour like @Jen does.

As mentioned in another thread, I installed Android APS on my phone a while back and it tracks total IOB - Bolus + extended bolus +/- Temp Basal. It also gives a nice prediction of future BG based on Total IOB and COB. If you have the Close Loop turned on it gives temp basal suggestions. In using this for a few weeks, I have gotten used to being a little more bold with temp basals. (I don’t leave it on all the time because it is a PIA to keep adjusting your basals all the time

- I only use it for experimentation.)

I find if I have been overly aggressive with my meal bolus and I have a lot of IOB left, a 0% temp for 1/2 or 1 hr will eat up some of the extra insulin I gave and prevent the future low.

This is similar to a super bolus but instead of suspending the basal right away with the meal, I basically just turn the basal off when I start to hit the tail of the bolus. The tail of the bolus then covers the total basal needs. It is hard to do this manually because you have to time it just right, but I find AndriodAPS does a fine job on altering me to the impeding low…

For lows happening now, I usually just treat with carbs, but if there is a lot

For highs, instead of giving a micro-bolus I sometimes use a 0.5 hr temp basal (equivalent to the bolus amount) for a slow BG rise. It allows me to cancel the temp basal if the slow rise was a false CGM reading.

Jen - I see the same thing. 60 minutes is too long for me to have insulin delivery suspended.

Sure, I can understand a bump up in basal for something persistent, like if you are sick, have hormone spikes, or an infusion site is not working well. Things where you keep going high for a particular reason.

Yeah - this would be our approach. After food/bolus is done and gone. And if it is going into night with an upward trend at 160. Then I would bolus the 160 (little more figuring the 160 might be a 180 by the time the bolus starts to do anything) plus a temp basal of maybe an extra 15% (depends on the slope of the cgm graph) for maybe 6~8 hours to try and level out the overnight cgm graph.

I find if I have been overly aggressive with my meal bolus and I have a lot of IOB left, a 0% temp for 1/2 or 1 hr will eat up some of the extra insulin I gave and prevent the future low.

Here is a real life example from today where I cut my basal for 1 hour total in 2 x 0.5 hr chunks. Worked perfectly.

Basal rate is the blue line. Green is past blood sugar and purple is predicted. 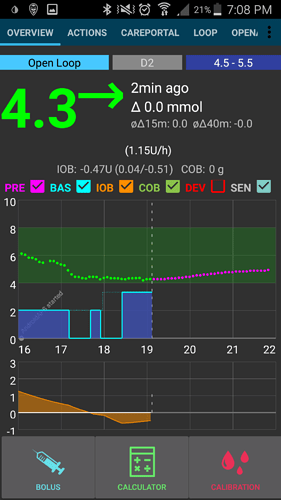